"Running Ransom Road: Confronting The Past, One Marathon At A Time"


As a drinker, I mistook the presence of fear for cowardice. I was terrified of conflict; something both amplified and brought on by the bottle. Even after I quit drinking, I stayed scared, the fear ingrained in my fibers. I began to believe this was who I was, born afraid. It took years to realize that courage isn’t the absence of fear. It’s being scared and acting anyway. No, that’s why I ran these marathons. For what they represented: the physical manifestation of going through something, not around it. I was looking at myself with a raging, surging heart, and not turned away. Fear makes me human. Running allows me to act.  ~Running Ransom Road, Caleb Daniloff

More than just a physical triumph, running a marathon is a way to gain mental clarity, to seek a spiritual awakening, to experience emotions in a raw state, and to simply chase the dragon down and feel the endorphin high of moving forward for 26.2 miles.  When training is at its peak, there is little deviation between the physical act of running and the interpersonal battles against doubts and fears and very often, lingering demons from your past running behind you and nipping at your heels.

So, if you could run a marathon in every city that formed who you are and push your body into a spiritual state and ready vessel for all the memories, trauma, and painful breadcrumb past you left trailing behind, and could breath it all in during a 4 hour  run, what kind of insights might this bring?

This is what happens in ‘Running Ransom Road, Confronting The Past, One Marathon At A Time,’ by Caleb Daniloff. The author visits marathons located in key locations related to his history of addiction; Boston, New York, Moscow, and his place of birth, Washington DC, among other races. The book shoots back and forth from past to present, linking the author's current thoughts and goals of running to his past life of self-destruction. The author recounts and reflects on his alcoholism, fighting through an understanding as his legs fight to keep moving towards the finish line.  Yes, he is the very unlikely marathoner, considering the extent to which he dedicated his life to drinking.  The goal is partially to break the 4 hour barrier, but also to break through to a better understanding of himself, and come to something close to peace with the wreckage of his past. 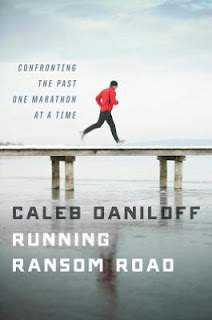 Each chapter is a race, and we experience the intriguing mindset of the author journeying through 4 marathons, and three races in an 18 month period

What is wonderful about the book is that Daniloff is a gifted writer first, or at least that’s what shines through, and his personality is one which has all of the interesting jagged yet fragile edges of an addict, and with all the determination and stubbornness of a distance runner.

The metaphors he uses are tremendous, and I am thinking that a handful of writers could make a living off the scraps of metaphors Daniloff has come up with but never used.

And there isn’t a marathoner out there of all speeds who won’t connect with his writing descriptions.  I’ve always felt if running could be fully described, then it wouldn’t be running but something much less, as it’s effects escape meaning that words can give. Daniloff describes the joys of running in a spectrum of phrases that came close, and more importantly, it was clear that he “gets it”- as running elitist as that sounds.  The near stream of conscious running descriptions rival those of any running book, and are fresh, subliminal and poetic.

In an early passage, Daniloff describes the primordial experience running can bring:

“Some runs, I got to breathing so deep and full, I was sure I was pulling oxygen and light into some dusty, primordial corner, where perhaps gills once floated open and closed.  That sensation, coupled with the rush of my feet, filled me with a sweet, swooning lightness and the feeling that I could run anywhere.”

On Morning Running:
"I never pictured myself an evening runner. The thought of changing into shorts after eight hours at my desk, several meals coating my belly, the day’s baggage clinging to me like a rucksack, seemed onerous. But worst of all, sleeping on that shaken snow globe of endorphins seemed like such a waste."

Evening Runs:
"Running in the evenings feels different. Things are winding down but there’s a thicker, crowded, louder energy, as if the world isn’t’ yours alone: everyone’s claimed a piece and you’re just looking for a free outlet to plug into."

All of this, but you’ll also find the mundane yet near universal experience of navigating a pee in the bushes at the beginning of a marathon, the importance of body-gliding one’s nipples, and the constant runner’s math all of us do trying to push our body past the finish line in some arbitrary time trying to prove we’re worthy.

Yet, this is certainly not a technical piece on running.  Not until the end, in fact, does the author realize the importance of keeping an even pace through a marathon to get his best result (when he speaks of ‘banking’ time, you can’t help but scream “no, don’t do it!)  But I think this is what keeps the novel honest and raw.  Once you start getting into lactate acid threshold levels and tempo runs and marathon pace runs and Yasso 800-ing and McMillan-ing, something is partially ruined that can’t be gained back. The author would turn from garage-band runner into an overly produced piece of work. How different all of our runs might be if we never bit the technical running apple.

Rather than a lesson on how to run, it’s an inward, honest self-reflection of a private world that is fragile, longing for something different, yet, as he describes in one interview “in love with this alienation” that addiction brings.  The sense of loneliness continues even in his recovery, where he does not share deep experiences with sponsors and other recovery folks, and, in fact, laments changing relationships with past alcohol-imbibing friends. It is a solo descent into his addiction as well as a solo ascent to recovery. At the same time, there’s the silent connection to both runners and the spirit of the run itself.

This book spoke personally to me, as a marathoner and recovering addict. (Click here for my post on Why Addicts Run) Scene after scene, I felt fortunate the author could describe my own experiences to me in a poetic way. It helped that I got all of his musical and literary references.

I particularly enjoyed the Boston and New York marathon stories, one I have ran and the other I am preparing for, but the Moscow experience of doing a marathon is one not to be missed.  Cultural differences do impact marathon aid stations.

Since this book speaks to me so uniquely, the question is then how universally will it be enjoyed by at least the running crowd first, by those looking for a recovery from addiction memoir perhaps second, and finally, the population of readers at large.   The honesty, the writing, the paragraphs which are enjoyable by themselves and not just because you wanted to breeze through them hoping the next moment must be the payoff, all make it a book of universal appeal. It is artfully crafted yet not dribbled with sentiment the way many addiction memoirs seem to be.

If you’ve read a ton of running books, you may not have read one like this, and if you’ve read a ton of self-discovery books, where there’s a final AA speech in front of a crowd, and you get your token, and then your spouse appears at the back of the room, and everybody cries, and true love lasts forever, and a REM song plays.  No, this is not the one either.  Illuminations and epiphanies sprinkle down during runs, and they are received with a questioning uncertainty of one who is always running to figure out who they are.  This is what life is, this is especially what recovery is, and as the author states,  “No longer do I run from my demons, but with them.” but the run must go on, since, “ you never outrun your demons, but if you maintain forward motion you might just get them to tire a little.”

In gaining his sobriety, The author makes it clear that he didn’t connect with the 12 step program of Alcoholics Anonymous, but does not disparage those who follow this path one bit.  Two thoughts on this (and excuse the fairly esoteric tangent):

One is, those in AA, I believe, are often way too quick to disregard those who don’t’ connect with aa and lump them together with the vast majority of alcoholics who simply want to keep drinking and will point to any annoyance to justify their continued self-destruction. This does not always have to be the case.

Secondly, the author has worked the 12 Steps.   Yep, it’s all there.  The unmanageability, and powerlessness of step one, the turning his life over to a new order and higher power of 2 and 3, the self-examination and personal inventory  Admitting to God and to himself the nature of his character (often during a marathon run) of steps 4 through 9, and the spiritual awakening that concludes in step 12.  The author speaks to this when he states “every time I run, I’m having a conversation with my purest self, my moral inventory on full display.” And he calls running his “daily prayer service, the marathon my vision quest.”

With this book, the author is carrying on the message to others.  As for going to AA meetings, if you can tell me which step describes how one must attend such a formal meeting, I’ll buy both you and I a drink and throw my own 20 year coin into the wishing well.

So, Mr. Daniloff, here’s your 15 year chip for working the steps, and here’s your medal for writing perhaps my favorite book on marathoning.  It is certainly the one with the most dog-ears on my paperback copy, and definitely the one which spoke most personally to my experience as a marathoner constantly running to stay just a few steps faster than the addiction demons nipping at my heels.

great review! the premise of the book is super interesting, i like the chapter by chapter race layout. i've not read many spiritual type running books, i know they are less common, but the clips you posted definitely demonstrate the poignancy with which he writes...i LUV the morning run part. i'm a morning runner. :) i do like that he starts to later phase in some technical parts of running only because i think the training or the planned 'i'm going to really hurt and know it, so let's do this thing' offers another sort of spiritual/mental facet. thanks for sharing about this one!

This review is fantastic, and I would really like to read the book when it is available. Thank you for sharing it!