(I put out a request for guest blog posts, and struck it big. Here is Alison Armstrong's detailed analysis of Ginger Snaps, a must see movie. And this is a must read analysis)

Fleeing fairytales of prince-pleasing Cinderellas and toe-confining glass slippers, a girl hibernates in her fantasy lair. She, like the passive damsels she despises, desires transformation, but the metamorphosis she craves is as terrifying as it is ecstatic. A beast within her moans, and the girl-skin casing splits open. 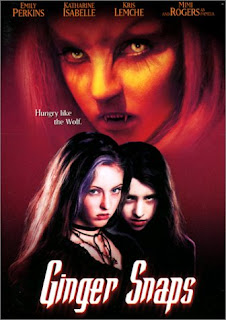 Unlike vampire films, in which females appear about as frequently as males in the predatory role, most movies involving shape-shifting, at least until recently, have featured a man as their growling, hair-sprouting main character, the “beast” seeking his young, innocent, succulent, smoothly depilated female “beauty.” Despite the modern settings and modern characters in many of these films, the same beast/beauty gender roles usually predominate, indicating that even in the supernatural realm a certain degree of raw animal attributes are accepted, at times even celebrated, amongst men, whereas women are generally encouraged to embody a sweetly perfumed, cheerful, sanitized, unaggressively alluring yet pleasantly sensual ideal that is often at odds with their bodily processes and personality. Although women spend their reproductive years enmired in the animality of their menstrual cycles, they are still expected to conceal the evidence of their beastly biological bondage, the tell-tale ebbings guiltily staunched like the blood of a murder victim, the odor disguised by pretty-smelling, potentially poisonous chemicals. Women battle against their bodies, the physical aspect of themselves by which they are judged and because of which they often suffer. Therefore, it is even more relevant perhaps for the shapeshifter film to have a woman instead of a man undergo this physical transformation of self and body.

Ginger Snaps features a female shapeshifter/beastly doppelganger to explore themes of sexuality and self-identity. Making blatant use of traditional horror movie conventions related to shapeshifters, it subverts these clichés to examine puberty and adolescent psychology from a female perspective. 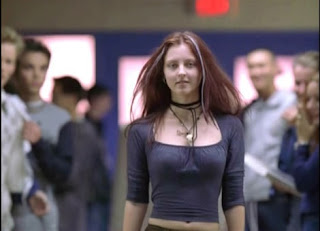 Ginger Snaps tells the story of Ginger and Brigitte, two misfit teenaged sisters who share a fascination with death. Creative and apparently proud of their outcast status, they like to take photographs of themselves pretending to be dead as a result of various suicidal techniques. Befitting their morbid, rather misanthropic outlook, they shun the cute, sexy, rather revealing outfits other girls in their school wear, preferring to shroud themselves in dark, baggy, Goth-like clothing. Unlike their female peers, they are late bloomers, having not entered puberty and showing little interest in the opposite sex. Scowling, their hair wild and seemingly uncombed, they keep to themselves, cherishing their gloomy, almost suffocating sisterly bond, a connection they believe will never be broken.

Their strangely reassuring routine of morosity is disturbed, however, by two unrelated yet equally impactful events: the discovery of a dog that has been gored to death by some large, presumably rabid, animal, and Ginger’s first menstrual cramps. At first Ginger refuses to believe her naively cheerful mom’s observation that the cramps are a sign Ginger is becoming a young woman, for she, like Brigitte, loathes the idea of menstruation and female fertility. Instead, she focuses her attention on her morbid, mutually protective bond with her sister. When, during a field hockey game, Brigitte is shoved by a popular mean girl and ends up landing in a pile of gored dog remains, Ginger diverts her mind from menstrual malaise by concocting with Brigitte a macabre plan for revenge. Defying warnings to stay inside due to the rabid animal attacks, they sneak out at night to carry out their plan and come face to face with another mortally maimed canine. As she and her sister stare at the mangled beast, Ginger notices blood trickling down her leg, the dreaded “curse” of womanhood. Aroused by the scent of blood, the creature suddenly springs back to life, attacking Ginger, clawing and biting, but Brigitte manages to destroy the beast, then helps her torn and staggering sister home. Despite the severity of the injuries, Ginger’s wounds begin to heal so quickly that Brigitte agrees to her sister’s request not to tell their parents what happened. It is to be their secret, another confidence only they will share.

As Ginger angrily endures her painful metamorphosis into womanhood, she also starts undergoing her transformation into a werewolf. Although her wounds from the attack have miraculously healed, the pangs of puberty have just begun. Bleeding profusely from her period and racked with pain, she bristles at the way menstruation is euphemistically discussed by her mother and the school nurse. When her mother tells her that menstruation is the “most normal thing in the world,” Ginger grouchily retorts that so are cancer and tuberculosis. In addition to experiencing intense cramps and copious bleeding, Ginger is disgusted by her body’s apparent treason against her. “You kill yourself to be different, and your body screws you,” she exclaims, fearing that her uniqueness, the creepy peculiarities she and her sister defiantly flaunted, are being undermined by this biological process that indiscriminately afflicts nearly all young women, preparing them for their traditional, domestic role as bearers and nurturers of children. Despite her antipathy towards menstruation, however, Ginger finds herself developing sexual feelings towards boys, and, as a result, starts dressing in alluring clothes to attract them. 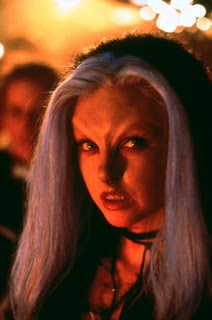 Although at first it seems as though her sexual awakening is causing Ginger to behave more like the other girls, thereby weakening her intense creative bond with her sister, the sudden changes Ginger experiences are not merely the effects of ordinary puberty. Ginger’s erratic behavior and emerging lust are also symptoms of lycanthropy. Paradoxically, the more Ginger, on the surface, appears to become flirtatious and conventionally alluring, like the other girls, she is actually becoming more of a monster. From her pretty mouth tiny fangs have started to sprout. Hidden beneath her cute, sexy outfits lurks a lengthening tail, and, where her wounds used to be, strange, bristly hairs erupt. Only Brigitte knows the secrets Ginger is desperate to conceal, and Brigitte bears the brunt of Ginger’s volatile stew of emotions regarding them. At times Ginger embraces the changes; at other times they appall her. She likes the “wicked” feelings of power and eroticism she feels as a result of her pubertal and lycanthropic metamorphoses, but she fears the rapid progression of symptoms she cannot control.


Her pubertal hormones, intensified by the lycanthropic virus, make her a fierce female beast in heat, desperate to mate, and her ravenous werewolf hunger goads her to kill. Flesh to copulate with, flesh to consume she craves, the desire for sex and the hunger for prey becoming more closely linked as her brain is controlled, her willpower diminished by the onslaught of hormonal and viral-triggered impulses. When she finds a boy who wants to have sex with her, she becomes the aggressor, groping and biting like a maenad, infecting him with her virus. Still ravenous and perhaps dissatisfied following her bout of frenzied fornication, she kills a dog, then, covered in blood, slinks home and vomits. Sullenly, she realizes that even though she overpowered her lover, assuming a much more masculine role than the startled boy anticipated, she will still, by society’s standards, be derisively dismissed as a “lay,” whereas the male will be regarded as a conquering “hero.” The fury of a wolf-woman scorned simmers within. Her appetite for sex and gore, temporarily appeased, has not been sated.


As Ginger’s transformation process continues, her murderous instincts increase. Although repulsed by the physical changes gradually taking place, she feels exhilarated and empowered by her bestial strength and ferocity. "No one ever thinks chicks do shit like this. Trust me,” she proudly exclaims. “A girl can only be a slut, bitch, tease or the virgin next door because girls don't know how the world works,” whereas she experiences an ecstasy beyond anything most people, especially women, have known. “It feels so... good,” she later tells her sister after slaughtering the school janitor. “It's like touching yourself. You know every move... right on the fucking dot. And after, you see fucking fireworks. Supernovas. I'm a goddamn force of nature. I feel like I could do just about anything.” Ginger is addicted to the thrill of murder, the atavistic violence associated with her regression into a repulsive, ruthless creature neither human nor animal but assuming the most dangerous characteristics of each.


Brigitte struggles to reverse her sister’s bestial transformation. With the help of a male friend knowledgeable about werewolf lore, she experiments with monkshood, a plant traditionally regarded as a lycanthrope deterrent. When the boy Ginger infected turns into a werewolf, Brigitte manages to inject him with the monkshood, thereby eradicating his symptoms. Ginger, however, resists Brigitte’s attempts to cure her. Although Ginger becomes depressed after one of her kills, even cutting herself and telling Brigitte she wants to die because she cannot control her bloodlust, the murderous ecstasy her lycanthropy provides overrides her occasional bouts of despair as well as her residual humanity. 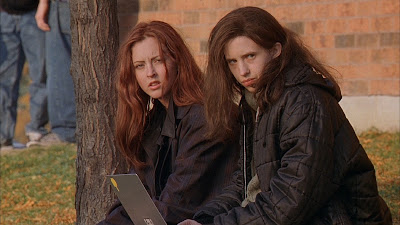 Ginger is becoming more beast than person, and this beast is much more horrific than any real-life animal. Lacking any of a wolf’s majestic beauty, the mutant monster Ginger transforms into resembles a gruesomely swollen sow with a rictus snarl spread over its slavering porcine muzzle. Ginger is too far gone to be redeemed, having lost her human conscience and any control over her savage impulses. In a final showdown Ginger attacks Brigitte, and Brigitte stabs her sister to death.


As in traditional werewolf movies, Ginger Snaps concludes with the destruction of the dangerous creature. However, unlike Larry Talbot and his lycanthropic descendants, Ginger does not return to human form after her death. She is not given this post-mortem benediction. Instead, her grotesque bestial corpse lies in a distended heap, bloated or possibly even pregnant with some aberrant but hopefully never-to-be-born progeny. Ginger has achieved her former goal of being different than other girls, not bound to a life of conventionality and domesticity, but, though she experienced feral thrills surpassing even her darkly creative imaginings, she ended up becoming enslaved by her body and her uncontrollable urges. Instead of flying free like some wildly exotic butterfly, she remains trapped in a decaying tumescent cocoon, never able to escape her prison.


Although shapeshifting offers the potential to attain in animal form an ecstatic sensory experience that transcends the language-filtered limitations of human consciousness, it often imposes its own restrictions, the transformations occurring unbidden, the result of lunar phases or turbulent emotions, such as anger or lust. Its addictive thrills can, as with Ginger, overpower the will, imprison the soul.

Alison Armstrong is the author of two literary horror novels (Revenance and Toxicosis) and a novella (Vigil and Other Writings). Her work focuses on inner terror, stealthily lurking, solipsistic dread and nightmare flash epiphanies. Having obtained a Master of Arts in English, she has taught composition and literature at Washtenaw Community College in Ann Arbor, MI and Kingsborough Community College in Brooklyn. In addition to her novels and novella (available on Amazon), she has recently had poetry published in The Sirens Call (http://www.sirenscallpublications.com/pdfs/SirensCallEZine_February2016.pdf ). Currently she is writing Consorting with the Shadow: Phantasms and the Dark Side of Female Consciousness, a book that will combine literary and film analysis with fictional explorations of women’s experiences regarding dark entities and doppelganger figures. Further information on her writings is available on her Web site, http://horrorvacui.us/ , and on her Facebook page for the novels Revenance and Toxicosis: https://www.facebook.com/RevenancebyAlisonArmstrong/