One of the worst days in Martin Jones' life was when at 19, he became homeless and found himself wandering along 8 Mile and Woodward in Detroit, lugging his belongings in bags.


"I had no idea where I was going to be," Jones said.
He was rescued when a van pulled up and someone told him about Covenant House Michigan, the Detroit branch of an international faith-based nonprofit headquartered in New York. The social service agency's mission is to help teens and young adults who are homeless, runaways or high school dropouts. -An excerpt from Sundays Detroit Free Press

Twenty training days left until I start my taper for the New York City Marathon. I’ll be running for a myriad of personal reasons, but also for a significant cause.

Homelessness, under-education, lack of job training, and the squashed and squandered opportunities for young adults at their crossroads;  I’ll be trying to stamp these out with each footstrike as I run 26.2 miles to benefit Covenant House. 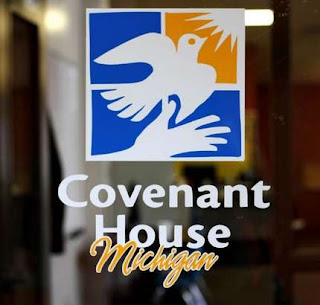 Homelessness and marathoning have crossed paths for me in an odd way. The morning of my first marathon, I was so terried of what I had gotten myself into and was shaking with anxiety.  I was dropped off at the start in the predawn darkness. Through the cold, moist autumn air, I approached the massive crowd at the start. Nerves and my morning's hydration hit, and I needed a port-a-potty, but the line in front was huge. But I was resilient. I ducked into some trees next to a building with my Saucony's rustling leaves all around me. I made sure I was alone, got ready to do my business when below me something moved.  What? yep, something moved on the ground, and I realized it was a leg, connected to a body and I quickly realized someone had made their bed overnight to hide from the cold.

This was real resilience.

In my novel The Jade Rabbit, it's a shelter for runaway youth that provides much of the setting, and it is at a homeless shelter along the stretch of the last miles of the Detroit Marathon that provides one of the novels final story line arcs.

And in , I am running for Covenant House who not only does outreach and houses youth, but does job training and provides education. For Covenant House of Michigan, this includes a school right on campus which serves much of the surrounding community, all eager for the safe, loving, and nutrient-rich soil to try to sprout a fruitful life.  They are a great way-station and an oasis among the difficulties of Detroit.

Unlike the fellow I awoke in the leaves, most homeless folks aren't those you see holding up signs and, at times, aggressively approaching folks for change.  They are the silent type living in substandard housing, have been hammered by unexpected medical bills, or layoffs, or in the case of many of Covenant house clients, have aged out of the foster care system and have little resources to help them.
After 17 years as a substance abuse therapist, I have recently changed roles to a medical social worker and have seen those with severe medical problems who were covered under the benefits that ended at age 18, and thus they were out on the streets, getting their best meals at frequent emergency room visits and discharged to a world with lack of resources.

20 days left of training, the final sprint.  I’m hoping to hit up a 16 miler, a 20+ miler, two speed sessions, two hill sessions, three full days off, and sprinkle in some basic miles in between.

In the meantime, a big thanks goes to those who have contributed to my fund-raising for Covenant House, since I’m simply doing something I love. I’m hoping that together the  nearly five thousand dollars pays the yearly gas bill for the outreach van to keep looking for lost ones on the streets of Detroit and bringing them to the safety of Covenant House. 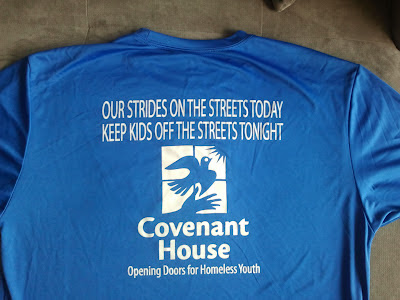 Sounds like a great cause! And how inspiring/fun to be running for a passion of yours!

I love Covenant House. I always tell kids and teenagers about their "nineline" which can help kids who are in any sort of trouble or danger to find help. (Its an easy number to remember: 1-800-999-9999!)