Life of Pi ~ Book Before Movie 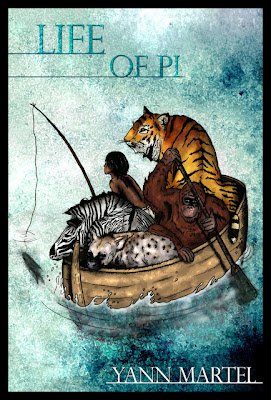 The novel ‘Life of Pi’ was only on my distant radar, until I saw the stunning scenes of this mega-3d movie made by Ang-lee, my brother by another mother.  Of course, I wanted to go ‘book first, movie second’, since the other way around just doesn’t work as well, so I jumped into the novel to free myself to see the movie.

The Life of PI is the story of a young man, a religious studies and zoology major in college, who sees truths and beauty in 3 major religions so chooses to follow all of them.   This spiritual world gets hammered and tested when a shipwreck leaves him lost at sea on a lifeboat along with some of the animals his father was transporting to sell to other zoos.

The novel was simply tremendous.  The writing was both easily digestible and yet filled with deeper implications. Piscine’s, or “Pi’s” thought patterns were intriguing, including his initial inquisitiveness and near naivety before the shipwreck, to his brains struggle for survival and the delirium that follows, to his post-rescue riddling of the insurance representatives investigating the cause of the crash.  (This is not a spoiler, since the reader knows right up front that Pi survives.)

This novel can be read simply for an action, intrigue, and survival story. The bulk of the story is a very entertaining 'lost at sea' struggle that gets as gritty as any you've ever seen or read about.  But my guess is there are tons of English professors who would love to see their students turn in papers with the following, deeper subject as their topics:

~Symbolism of the Hyena, the Orangutan, the Frenchman, and especially, Richard Parker The Tiger.
Fear, nature, the Id or duality of man, childhood demons conquered (you’re going to be a goat fed to the tiger, his brother tells him)

~Compare the Tiger in Life of Pi to the volleyball ‘’ in Castaway.
Okay, you may just get some laughs and nothing higher than a B+ if you write this paper.

~Role of carnivores versus omnivores in the novel.

~Nature of storytelling itself.
Both in Pi’s early desire to compare and contrast the mythology of major religion, to his story of how he survived the shipwreck, stories are presented as providing meaning and creating larger than life myths which lead to spiritual faith.  (Pi laments the lack of more grandiose stories in Christianity).  Does belief in a story make it more or less true?  When you are trying to tell the truth, is it best to do so in Fiction?

Ah, to be in school again and spend hours writing such a paper into the wee hours of the night. Good for me, I can just enjoy and think as deep or shallow as I’d like.

Among many others, one thing that has stuck with me is the things Pi had to do to get by. Eating animals as part of survival is described as both barbaric and instinctual, and the degree of Pi’s desperate hunger leads to desperate measures. While reading, I made some out loud gasps at some of the ways Pi survived, causing others in the room with me to turn their heads and wonder what was on my kindle.

But upon completing the novel and still savoring its taste, I found myself noticing all the food I waste and imagining what I would eat ‘if I really had to’. Like Upton Sinclair’s “The Jungle,” Life of Pi maybe aimed for the heart but accidently hit the stomach as well.

The odd thing is, many readers will discuss back and forth what was real and what wasn’t real in the novel, but I like to believe, as I think the author and Pi himself believe, that it doesn’t matter and it misses the point. Truth exists in the eye of the storyteller and the observer, and in the mind of the reader, so if you read about it, saw it in your minds eye, then it happened.

This novel fired on all cylinders, and I’m going to be waving it under the noses of readers everywhere. And just like Tom Hanks who missed , and Pi who misses his tiger, I miss reading this novel each night.  At least I still have the movie. 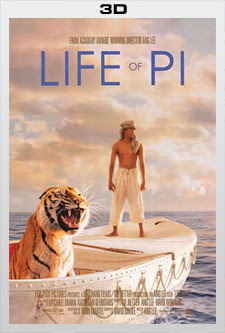 Mark Matthews,
Author of Stray and The Jade Rabbit
at December 06, 2012

Email ThisBlogThis!Share to TwitterShare to FacebookShare to Pinterest
Labels: life of pi, life of pi 3d