I started this blog after hearing all about how I needed an "author platform"  Yes, I was starting to feel quite inferior. So, I threw one up.

Yep, I threw it up and it looked like word barf.  But as the various thoughts came forth and it started to define itself,  I've found that writing about running has come nearly as natural as running itself.

But, I've also tried to mix in thoughts of  writing,  book and movie reviews, and once in a while a blurb about my own novels.

I'm thinking that some of these post bore those who are interested primarily in the running. They are kind of like those songs in concerts that make everyone sit down and stop dancing.  The audience doesn't mind it, but they're really waiting it out until the next number.  Thus I'm holding them back a bit.

So, I don't think the current blog title really fits for me anymore. The writing stuff and book reviews have slowed to a sprinkle.

So, a slight name change for this domain, a switch in word orders, and adding.. 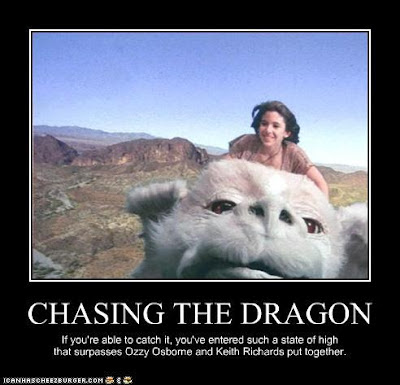 Chasing The Dragon is the analogy drug users refer to when they are always chasing their next high, looking for it to live up to their experiences from memory but never quite getting there. It becomes a case of diminishing returns, always seeking the highs of yesteryear but never finding them, yet instead of giving up, the chase becomes more desperate and frenetic. This chase for this mythical experience persist into eternity. It is certainly something I know quite a bit about. (link)

When I think about why I run, it's to get high, pure and simple.  It's for the buzz. The feeling of a new kind of blood coarsing through my veins, feeling more alive, more free. The high can be running away from rage or stress or frustration, or it can be to accentuate joys, but the number one purpose I run is to transcend my body for a while, to become something larger than life but also outside of my life.  During the run, the atoms spinning in my head are rearranged, my emotions get boiled into something more pure, and my spirit feels unencumbered by my body as a cage.

It certainly doesnt' happen every time, but I know if it doesn't happen on today's run, then the High of the run will happen sometime soon.

Sometimes this high is due to an accomplishment, sometimes it's due to the beauty of where I'm running, but largely it's due to the internal chemical combinations going on inside me, and the spiritual, mental, and emotional benefits.
In this sense, I'm still 'Chasing the Dragon', except in the case of running rather than in drug addiction, once in a while, I actually catch the monster, throw a lasso around his neck, and go for a sweet ride for an hour or three.

When running and marathon training is at its peak, you don't experience anything in your life without it being reflected in your training, and your training bleeds into every other area as well. It becomes the musical soundtrack of your existence, so running is part of most anything I experience, especially as  the NYCM gets closer.

Still,  I'm still gonna have to 'literary-ize' the place from time to time, but will  try to chronicle and focus on my attempts at Chasing the Dragon, with more posts pertinent to those who are chasing their own dragons as well. 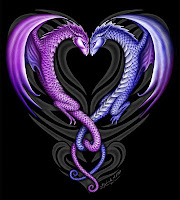 Reviews of Stray
STRAY on Amazon

Email ThisBlogThis!Share to TwitterShare to FacebookShare to Pinterest
Labels: addiction, chase the dragon, chasing the dragon

okay, so i SWEAR, the second the page loaded, before i could scroll past the picture and read the post i thought, "wtf, the name is different, right? i'm not just imagining that...plus, the words are pink...that's new..." and then i scrolled down and duh. but i'm glad i wasn't imagining things. hey, u gotta roll with watever fits and that usually changes and evolves over time anyways. so keep chasing man. AND...big shout out cuz i luv the Neverending Story. "Atreiu!" (i'm sure i spelled that name wrong.)

Again, and I know I have said it before, your writing never fails to grip me from beginning to end. I find I can relate to it so much and the things that you are saying. I really like the name change - it's perfect and I think it conveys exactly what you intended to. You are an inspiration to me as a writer, thank you.