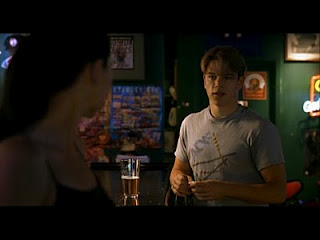 Skylar: "So, maybe we could go out for coffee sometime?"
Will: "All right, yeah, or maybe we could just get together and eat a bunch of caramels." Skylar: "What do you mean?"
Will: "Well, when you think about it it's just as arbitrary as drinking coffee."
I booked my flight, and I have my official race code to enter the 2012 New York City Marathon. Yep, it's a secret password and includes iris scanning technology and fingerprint analysis that allows myself and myself alone to enter. If I do not raise the expected amount for Covenant House as required, then the entry will self-destruct.
Damn, I'm excited. I already have three 20 milers under my belt, one of them progressively faster, finally a couple 40 mile weeks, feeling strong now, and I'm looking to make a brand new New York themed playlist.
Once I finish New York - which is not a given, since stronger, faster, and more prepared runners than I have DNF'ed plenty - but if I finish, I will have completed 3 of the world's 5 major marathons. Boston, Chicago, New York.  Just a hop across the pond to run Berlin and London, and Bamn! got the 5 majors done.  (Here's a list of folks who have completed all 5 majors)
This is much more reachable than doing 50 in 50 states, but then again, there are a slew of other accomplishments I can think of just as arbitrary.  (Here's a list of folks who have done 50 marathons in 50 states) 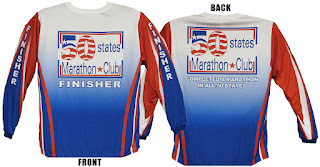 How about running a marathon in all major brands of shoes?  Asics, Saucony, Nike, Brooks, New Balance, Mizuno, yep, I'd do one marathon in them all, and then do at least a half marathon in some Newtons. (sorry, no list available)
Or maybe I could run a marathon in every emotional state as described by Wikipedia?  Or one while committing all of the seven deadly sins?  (they'd close the course on me while running in Sloth mode, of course, I'd hog all the post race-swag during Gluttony mode, but I'd probably PR during my Wrath phase)
Or I could run one marathon while listening to the entire soundtrack of Led Zeppelin, then another while listening to The White Stripes, and finally one to the tunes of Justin Bieber?
I personally would prefer to run a marathon in every city associated with Grateful Dead's Song Truckin, ("Chicago, New York, Detroit,  and it's all the same street") which means I just need to do Houston and Buffalo. No, I'm not counting New Orleans, since the song warns to stay away from there.
A marathon dressed as each of snow whites Dwarfs?
A post and pre-op gender reassignment marathon?
A marathon for all of those who died during the U.S invasion of Grenada?
It all starts to sounds like some drinking game made up by Andy Cohen on Watch What Happens Live. 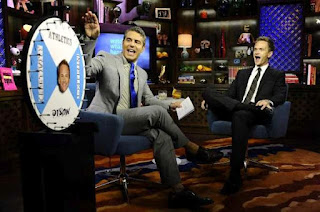 Still, all of these are noble goals to shoot for, all excuses to simply stick out a carrot and make us continually chase the dragon down. Even if we get there, we'll find something new.
And afterwards I can go for coffee, or, I can just go out for Caramels, because when you think about it, its just as arbitrary as a cup of coffee.
Reviews of The Jade Rabbit
The Jade Rabbit, on Amazon

Ok, I laughed out loud at the 7 deadly sin concept. Hilarious. And I don't drink coffee so I am all for the caramels! :)

I loved running New York. It's a hard course to DNF, what with the crowds of spectators, gorgeous landscape and nice little rollers just as you head back into Central Park. Beware of the bridges!

Yes, I have yet to have a DNF, but, the running Gods will strike me down the day I lose my humility and think that a DNF is not possible.

And yeah, I've heard of the hills at NYCM and the speedbumps at the end which feel like mountains.

seriously, it's getting insane how/what people have to do to get into these marathons now....in a few years people will have to be offering up their first born children or get the race logo/name tattooed onto their skin. :P

that said, i better be about losing a limb if u DNF on us. ;)