I put out a call for guest blog posts, particularly from writers who may have been touched by addiction. Huge thanks to writer Christa Carmen who responded by sticking a knife in her heart and spilling it all over the page. Christa has stories splattered about the book world, and one has landed in Year's Best Hardcore Horror, Volume 2. She's been a tireless advocate for addiction awareness and treatment, and has written a truly touching and personal blog post. Check it out:

When I was in middle school, I was always primed for the possibility of finding the next epic read. Stories and scenes that topped this list were the shipwreck at the start of Black Beauty, Where the Red Fern Grows, with its fulfillment of the heartbreaking but awe-inspiring Native American legend, any of the adventures of Pippi Longstocking, and pretty much all of Roald Dahl’s books, for their championing of the young protagonists over the villainous, ‘I’m right, you’re wrong, I’m big, your small’-spouting adults. Despite my love of reading, it never occurred to me to want to be a writer myself, and I continued on this blissful path of consuming books and reveling in epic stories until right around the time when eighth grade ended, and I sensed the move to high school looming on the horizon.


My first experience with alcohol gave new meaning to the word epic. Though it didn’t happen overnight, I began to alter my identity from ‘good student’ and ‘bookworm’ to include descriptors like ‘drinker’ and ‘party girl.’ I knew nothing of addiction, that, like a cucumber that becomes a pickle and can never go back to being a cucumber again, once the unsuspecting person crosses that line to becoming an alcoholic or drug addict, they can never go back to being a “normal” person again. Without even realizing I was addicted, addiction consumed my adolescence and early twenties until, while pursuing a Master’s Degree for Mental Health Counseling and undertaking an internship at a Massachusetts detox center, it occurred to me that there was another, better way of life. That nonstop drinking wasn’t as epic as I’d anticipated.


Getting sober is a uniquely terrifying experience; your personality and sense of humor, your hobbies, your purpose, and your reason for living are ripped away like a tablecloth from under a deceptively lavish dining room table. Only in this trick, the one doing the tablecloth pulling is exceedingly unskilled, a magic school dropout who brings the crystal water glasses, sterling flatware, and ceramic vases down with the linen. About six months after I stopped drinking, and the beast in my head that roared for more had quieted, I was able to hear something else. The voice was shaky and uncertain, but its message was clear enough: “Write something. Write anything. Take your mind off things. Tell a story.”

So I did. Or, I tried, anyway. Those attempts at short stories, the half-formed ideas for novels, were coming from a place too raw to produce anything more than narcissistic, woe-is-me drivel. Writing while newly sober is like going through your first break-up all over again; my work read like the screenplay for a particularly self-indulgent Lifetime movie, one that missed the mark on edgy by a margin one part Christina Ricci-as-Lizzie Borden and two parts teen pregnancy pact. My brain was too preoccupied with healing to connect the dots between the things I loved to read and what I was trying to write. That I struggled to make that connection, and subsequently abandoned the writing in the same way I had abandoned the counseling sessions and AA meetings, the sober friends and the commitment to self-care, is unfortunate. But that these abandonments led to the end of my sobriety is far from surprising. And so three years after I had ceased to be defined by drinking and using, I gave up on the search to be defined by anything else, and slipped back into the madness.

The disease of alcoholism and drug addiction is a progressive one; even in sobriety, it courses along beneath the surface, like a viscous, black river, ready to surge up and pull you back under. The search for a new epic drunk or high had begun, and being given a script for Vicodin by a well-meaning but clueless doctor did little to help matters. Relapsing after being sober for any significant period of time is like crossing into the dark part of a fairy tale, into the shadowy woods where witches in huts, brutal huntsmen, and evil fairies looking to strike dubious bargains lurk behind every copse of trees. You can see the castle off in the distance, and you know in your bones that you used to live there, used to be happily-ever-after, but you cannot for the life of you remember the way back.

And in my particular tale, I wasn’t meant to find the way out on my own. I required a veritable army of assistance, detox and rehab and outpatient therapy and medication-assisted treatment and oodles of support from family and friends. As if my fairy godmother and a helpful gang of woodland creatures come to warn me of my impending fate, should I not buckle down and get my shit together.

When I checked into my twelfth treatment center in four months, I had with me three things: a fair amount of sweatshirts (to stave off the chills), a small amount of hope, and a large amount of books. Books were the one constant at every one of the facilities I entered over those tumultuous four months. I read Anthony Kiedis’ Scar Tissue and Brain on Fire by Susannah Cahalan. I read And the Mountains Echoed by Khaled Hosseini, and books by authors in recovery: Caroline Knapp and Augusten Burroughs and Nic Sheff.

And then I picked up Life of Pi, by Yann Martel. A hundred or so pages in, the realization that I was in the midst of an epic story hit me. From a purely narrative standpoint, the book is about a young Indian boy crossing the Pacific Ocean in a lifeboat with only a Bengal tiger for company. Thematically, it’s so much more than that. It’s about trying to survive against all odds, about finding meaning through uncertainty, and that if all of life is a story, why not choose yours? It struck me, then. Life of Pi was a perfect metaphor for addiction: navigating life while sharing space with an apex predator, where the only way to survive is to learn to live with the beast, to come to an understanding that allows the two of you to co-exist.

Two things occurred as a result of this realization, this acknowledgement that addiction was a part of me, as inherent to my being as my height or eye color, and would require constant vigilance to be maintained. First, the tiger’s roar began to subside, no longer menacing my every waking breath. And second, I came to an understanding that the stories I considered epic, the ones I’d grown up reading and longed to write? Those stories were attainable by listening to the voice that spoke in the wake of the tiger’s growl. Being addicted to opiates stripped me of almost everything, but I’ve chosen a new story. By sitting patiently with myself, with no expectations and no reservations, that was when the writing came pouring out like sand through a sieve.


Writing is my addiction now, but it’s more than that. It’s become the lifeboat itself, the buoy I grab for when life storms around me or my muscles grow weary from rowing. I get more enjoyment from coming up with a story idea or completing a new chapter than I ever did from a drink or a drug. Sometimes the tiger bellows and sharpens its nails on the wooden slats, growing strong as he paces in the sun and salt air. But he has no more real power over me. Maybe someday, if he’s lucky, I’ll tell tales of the time before he was confined to his side of the lifeboat. It’s the best he can hope for.


And I’m telling you, it would be one epic read. 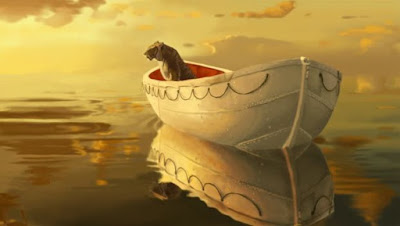 Christa has a bachelor's degree from the University of Pennsylvania in English and psychology and a master's degree from Boston College in counseling psychology, and she is currently pursuing a master's in creative writing & literature from Harvard Extension School. Christa works for Pfizer in clinical trial packaging, and at a local hospital as a mental health clinician. When she's not writing, she is volunteering with one of several organizations that aim to maximize public awareness and seek solutions to the ever-growing opioid crisis in southern RI and southeastern CT. Christa has work forthcoming from Unnerving Magazine, Third Flatiron Publishing, Tales to Terrify, and Alban Lake Publishing, and you can visit her at her website at www.christacarmen.com.

Your writing is EPIC, Christa. Do the write thing! TG