A Few Words with Matt Weber, the Brain Behind DOUBLE BARREL HORROR and PINT BOTTLE PRESS

Matthew Weber is straight up good people and the creative force behind Pint Bottle Press.  Here is what happens when you pick his brain:

Q: How do you describe the concept of Double Barrel Horror?

MW: Double Barrel Horror is like a CD sampler from the old days, when record labels would release an album with lots of songs by different bands, selling them cheap or even distributing for free in hopes of gaining new listeners for their artists. In this case I’m showcasing new talent in the horror fiction genre. Double Barrel Horror is an anthology “by invitation” where I pay authors that have impressed me in the past to creep us out in a two-story standalone eBook. The eBooks are then compiled into a single anthology available in paperback.

Q: How did you come up with the concept?

MW: I’m an author too, and had a couple stories back in 2015 that I held back from my last collection Seven Feet Under because I thought that, even though they were fairly gruesome, they were maybe a bit too tongue-in-cheek for the rest of the book. (I have a tendency toward dark humor–sometimes to a fault.)

So, to fill a lag between releases after Sinister Grin Press picked up Seven Feet, I thought I’d release the stories as a two-story eBook, which I’d seen some other authors do. But unless an author has already established a large, loyal readership, the likelihood of a two-shot eBook getting much traction is pretty slim. It occurred to me that if the stories were part of series, they might get a little more attention. I hadn’t seen anyone attempt to brand eBook short stories as a series, so I gave it a whirl. I knew that Amanda Hard from my critique group had an unpublished story, “Chef & the Maiden” which I particularly liked, so I recruited her to come up with the first twofer to accompany my own.


Then I thought, if double-branding the eBooks is a good idea, then tripling them would be even better … and the idea continued to grow.

Q: So you first publish the eBooks by the individual authors and then follow-up with an anthology that includes all the stories. This seems like a double barrel shotgun blast in itself.

MW: Yes. A lot of this is my own mad-scientist approach to a publishing experiment. The book market is so saturated that it’s difficult for a title to cut through the clutter and gain presence of mind in a potential reader. So how do I continually promote a book without being obnoxiously repetitive? How about if I promote the same book in seven different ways? By separating the authors into the individual twofers, I can offer them at such a low price (99 cents) that people can click the “buy” button without much pain involved. Then, if they like what they read, maybe they’ll buy the next entry in the series, and then the next. Like eating chips. That’s an easier pill for some people to swallow than a $12 book plus shipping cost. All the eBooks share a similar graphic design (common among both Volumes 1 & 2), and that’s meant to establish a brand identity. It has a visual impact, so rather than promoting a single book cover, I’m pushing seven similar covers (including the paperback) for seven times the promotional repetition. Hopefully in doing so, I’ll gain some brand-loyal readers. You could say the whole concept is cheesy and gimmicky, but indie press is like the Wild West, and I’ll try nearly anything within my means and meager budget to get readers for my authors.

There’s also another equally important reason for the individual eBooks: It provides extra motivation for the writers. It raises the stakes for them to deliver top-quality material. When only one author’s name is emblazoned across a book cover that will be heavily promoted by the publisher, the pressure’s on. The writers bring their A-game, because they know I’ll be shining a big bright spotlight on their work—individually—for the world to see. 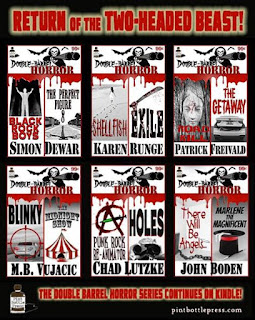 
MW: Absolutely not, and they never will be. Each book is an author showcase, so I want those authors to have compete flexibility to spread their wings. I do suggest some basic guidelines; namely, that these books are meant to be pulp fiction with visceral action and strong characters. And above all, I want these books to be fun, so people will keep buying them. This means I’m not interested in stories that revolve around quiet internal crises or mopey naval-gazing; there are plenty of other markets for that stuff. When I was growing up, Twofer Tuesday on the radio always came on the rock station—not the easy-listening channel. Double Barrel Horror stories should rock.


Besides, I think themed anthologies can sometimes homogenize things, and I prefer a lot of variety. Put it this way, I play bass in a hardcore punk band, but I listen to a lot of Frank Sinatra and old-fashioned country music. I like different kinds of music, different styles of writing and art in general, and I want the Double Barrel Horror series to reflect that kind of versatility. For example, Karen Runge’s slow-burn plots and elegantly insidious prose are starkly different from M.B. Vujacic’s punchy, raucous style of writing, but I love both their contributions to the series, and for different reasons.

Q: How do you choose your writers?

MW: I have to be familiar with their writing, impressed by their work, and have confidence that they’re in the writing game for the long haul. I only want authors who are serious about moving forward in their writing career, authors who I think will one-day make a name for themselves if they stick with it. Plus, it’s a prerequisite that I get along with the author. I don’t want to work with jerks or prima donnas, and there’s a lot of those in the writing field.


Q: You’ve released Double Barrel Horror Volumes 1 and 2. Will there be a third in the series?

MW: Most likely, yes. It’s funny; when I began this project I could tell that some of the authors I approached about contributing didn’t know what to make of me. Granted, I was new to publishing fiction and didn’t have much of a track record. The truth is, though, I’ve been in the magazine publishing business as an editor since 2001, so the transition to books wasn’t a huge leap. Now that I’ve got a number of books released on my Pint Bottle Press label, people have begun to take me (slightly) more serious. In fact, since the release of the latest Double Barrel Horror twofers, I’ve gotten a number of email inquiries from various writers who want to submit their stories to the next volume.

Publishing is a ton of work, though, so I’m going to take a breather for a while and refocus on my own writing, which always takes a back seat when I publish a new book. I’ve still got a few creepy stories left to tell.

Double Barrel Horror Vol. 2, edited by Matthew Weber, is available now from Pint Bottle Press as a series of Kindle eBooks at Amazon.com 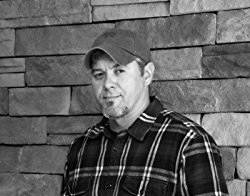