We all remember that old silk hat the kids found, but who had rights to its ownership? 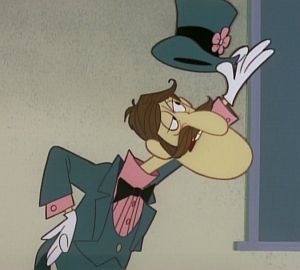 Like, in Frosty the Snowman, why does Karen wear gloves and mittens yet her legs are fully exposed to the cold? And if you watch carefully, when the children run out of the school house, a little boy jumps on a sled which goes both ‘up’ and down a hill?  Being an avid sledder, I just knew that wasn’t right, so my questions came.

And as I grew older and my moral compass developed, I started to question the Villain of the story of Frosty the Snowman. Yes, I started questioning the mythology that was part of my youth and I looked at the story through a different lens.

The cartoon version of Frosty begins with the Magician’s hat failing him while he performs to a classroom of children. He throws the hat in disgust, but just then the rabbit finally appears and hops away with the hat out the front door. The magician gives chase, but the hat ends up on the snowman the children have just built.  The iceman comes to life with his proud first words, “Happy Birthday!”

It was his birthday, and it was a regular miracle. A Christmas day virgin birth.  Indeed, ‘there must have been some magic on that old silk hat they found.’

But did they really ‘find’ the hat? They refuse to give the hat back to the magician, saying it was now there’s, but was ownership ever really ‘transferred’?  The magician did throw the hat away, but after he threw it he immediately tries to get it back, chasing it down before Karen places it on Frosty’s head.

So who does the hat belong to?

A fight over ownership of the hat ensues, and the conflict of the story becomes a chase, a hunt really. The Magician becomes an obsessed Javert, tracking the fugitive Jean Valjean Frosty to the North Pole, where Karen is bringing him so that he doesn’t melt away.

Why don’t we question which side is in the right? Do the sad faces of the children increase sympathy and tilt the justice in their favor?  What about the story of the Magician?  Who will tell that tale?

Well, after hours of investigation, wiretaps, and Google searches, I have learned the magician’s back-story.

His name was Peter. Actually Petra, and then Americanized to Peter. He was the child of a Russian immigrant. An alcoholic. Yes, his father was a magician as well, who used to curse his poverty and his pathetic black hat while taking slugs of vodka at the dinner table. As the liquid burned his throat his anger burned at his son. He told his son he was, “no good,” “a burden,” and that he was “naughty, naughty, naughty.” There was rarely food on the table. Often stale bread. Mold on the cheese needed to be sliced off. Just the green spots, save as much of the orange stuff as you can.

But as all little boys do, Peter loved and emulated his father, needed his fathers approval, and when he inherited the black hat upon his fathers passing he swore he would become a magician himself.  He would do what his father could not do; he would make the hat work magic and heal all the wounds caused by all those sharp, bitter words. Yes, performing magic would prove that his dad was wrong about him, he was a special person, and his father would finally give him an approving smile from his place in the after-life.

But the Hat didn’t’ deliver. It was sporadic and unreliable with its magic.  Sometimes it sprung forth multiple rabbits, sometimes flowers, but other times was useless.  Peter was never without the hat, however, and made careful to place it on the hook with tender care each night (but never on a bed) and, sometimes when he wore the hat he himself felt a magic glow and began to dance around.

Peter grew up very lonely and was unable to develop relationships so stayed in school as long as he could until he became ‘Professor’ Hinkle.  Like his father, he was socially awkward and had a tendency to repeat adjectives and adverbs when angry, such as “messy, messy, messy” or “busy, busy, busy” and never seemed to feel comfortable in his own skin or at job interviews.

The school gig where the story of Frosty begins was his big break. He hadn’t worked in months, and when the hat failed him at that pivotal moment in front of the classroom, it was a crushing defeat. Bitterness burned in his gut and the laughter of the children sliced his heart in pieces.

His pursuit of Karen and frosty all the way to the north pole just to get the hat back wasn’t the act of a selfish, bitter and cold man, but was the personal fight of his inner child started decades earlier. Making ‘real’ magic out of his father’s hat had been his lifelong dream, his lifelong battle, and the story of his struggle against his demons.

Yes, it was terrible and evil when he closed the greenhouse door trapping frosty inside and sent the snowman to his slushy doom. Peter Hinkle becomes his father at that moment, taking his frustrations out on the world around him, and the cycle continues.

The magician finally does give up the hat after Santa threatens to no longer bring him presents, which of course brings out all the transference issues he has had with his father (for, after all, what is Santa but our fantasized version of our Dads with a red coat on.)  First Peter must go home and write; “I am sorry for what I did to Frosty” a hundred zillion times.  Blame and shame the victim never fails to get results. 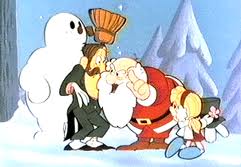 I remember as a child how sad I was for Karen when her teardrops spilled into the puddle that used to be Frosty, and how I wanted her suffering to end and her sadness to go away. Hurry, Santa, I pleaded in my head, tell her that frosty isn’t gone but will come back with the first Christmas snow. 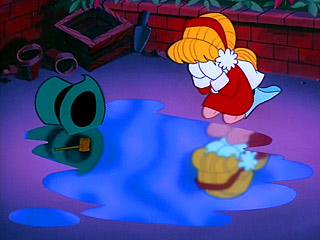 But who will cry for Professor Petra Hinkle, the Magician?

No one mourns the Wicked.

I've always wondered how she stayed warm, too.

Reading "Peter's" backstory, I think I spy traces of Asperger's syndrome as well...

I love the Wicked reference and hope "Frosty" makes it to Broadway -- it would need to be called something edgy like "Frosty and the Huntsman" to differentiate it from the Radio City Music Hall-style fare.

Brilliant! That's definitely a story that should be told.
I also agree with Annie's comment about Asperger's.

As a girl named Karen, I was teased by my brothers about my foolishness. ;)