What to do when science and experience don’t mesh?

I’ve always been one to read the directions last and  to go by instinct and feel first. I hate instructions with things like skiing and golf.  I’d rather “be the ball, Danny, be the ball”  (Caddyshack,) and don’t trust anything I read and only half of what I see. 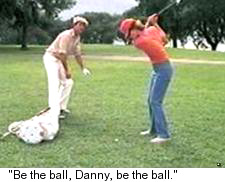 So when a study cites evidence that the best running buzz is a fairly slow cruiser rather than an intense, vigorous run,  I have to question it.

In a‘sweat-science’ article of runners world, a study measures traces of cannabinoids in runners' blood stream during various intensities of running.  It concluded that the biggest runner's high is gained in a medium intensity run, that is, "a level ‘2 out of a 4" run on the intensity scale,  rather than the levels 1, 3, or 4 which showed cannabinoid traces which were significantly lower.  In other words “walking and sprinting don't cut it for runner's high."

I wasn’t chosen for the study (I was busy) but my own personal experience and experiment is that my Runners High is the greatest when I’m chasing the dragon either running my fastest or my longest.  A good set of intervals, a tempo run, or the miles between 10 and 20 when I”m hitting a marathon-pace are when I get my biggest thrill.  And I would say this would be a level 3 or Level 4 intensity run.

So the basic conclusion (subject to various caveats, including the fact that they measured endocannabinoid levels in the blood not the brain) is that walking and sprinting don't cut it for runner's high: it's only a certain range of medium intensities that hits the sweet spot. One thing worth bearing in mind: there's pretty solid evidence that other factors like endorphins also contribute to what we think of as runner's high -- and they don't necessarily follow the same pattern. It may be, for example, that endocannabinoids dominate at low-to-medium intensities and endorphins dominate at medium-to-high intensities. 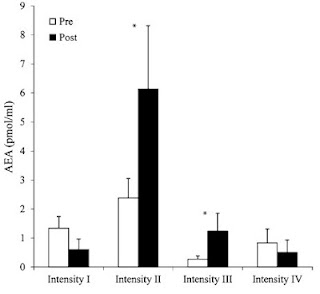 Here is a link to the full article.

So why am I experiencing different results?  All I can think of is that my pleasure center’s circuitry has been ‘blown-out’ since it has been bombarded by a barrage of chemicals, and that it has now mutated into something strange. How else to explain my bizarre ipod playlist, fascination with odd, dark shows yet affinity for the most Venus of chick flicks.

The article does refer to the possibility that there is other substances, endorphins, which dominate the level 3 and 4 intensity running levels that weren't measured in the study,  since they were focused on cannabinoid levels which (perhaps) dominate at the low to medium intensity levels.

This is an example where the study may mean something for me.

Meaning, as far as getting a runners high off of the cannabinoids of level 2 intensity:  I never ever did really like pot (a cannabinoid) anyway, which could even explain why I can get a little bored with the intensity two level.  (No evidence of paranoia or the munchies going on during these runs, but I did have the urge to pay hackey-sack and frisbee football.)

Side note: this is not a statement regarding what intensity levels are best to train at, since I’m thinking a dose of all levels is needed, but rather, at what levels do we get that out-of-body, surge of energy, elated sense of well-being  that comes from a blissful run.

More studies please. Keep em coming. They say that if science does not match up with an “old wives tale” (pardon the expression) then you better check the science. 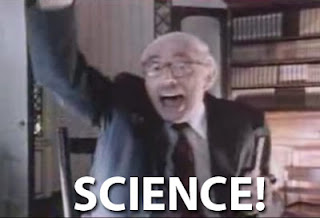 I bet more studies will show that higher intensity runs develop chemicals that as of yet are undetected and undiscovered.  But rest assured, that some day Big Pharmacy will discover them, learn how to replicate them, and  soon there will be drug companies trying to bottle the stuff. Next step is to get the medical industry to develop a “condition” for this new drug to treat, and then the drug can be marketed hard and heavy.  We’ll soon be watching commercials:

“Suffering from Endorphin Dysfunction?”
Try Run-Agra.
Ask your doctor.
"Warning: side effects may include marathons lasting longer than
than four hours."

I am so with you on this one Mark... I am bored out of my mind at a level 2 and experience the best high at much higher intensity. Hmmm...

i heard this study over at another blog (not to name because...) i wanted to leave a comment saying exactly wat u said but in a not so kind way, "this study was in runner's world, right? well if it came from running TIMES i'm sure it would say that running at a higher intensity left runners feeling way more high." lol. i think the reason the study could be skewed is that for the masses they don't like that kick your own butt kinda workout, it takes a sick breed, right? ;) but i can bet that those who do push harder get a higher endorphin fix. great post!