"How Was My Weekend?" You Ask.

It’s Monday morning, 8:32 am, and I plop my laptop bag on my cubicle. You’re sitting next to me, and give me a 'late again' look that I never seem to notice.  “How was your weekend?” you ask, not looking away from your keyboard.”

I know you don't really care, but I decide to give details anyways.

“On Friday, I watched The Descendants. It was either that or Mission Impossible 3: Ghost Protocol,  and since my wife was watching with me, George Clooney won over Tom Cruise.  I really liked it, except that Mr. Clooney seemed a bit too put together for a man who was being tested and about to crack.  I never got the sense he wouldn’t handle it all reasonably well, and in fact, expected him to grab a dozen folks and rob a bank at the end or something.”

“Satuday morning, I took a sweet run with 40 minutes of hills and then four mile intervals at the track. I’m starting to feel intimidated by the hills at the Ann Arbor Marathon, so have started to personify them, to talk to the Hills, to call them names and think out loud 'you got nothing, you got nothing! Bring it, bring it on' and I beg them to hit me like Rocky to Apollo Creed.  I didn’t want the run to end, since I knew once my legs were cooled down the tendons at my knees would swell and the bones about to crack.

"Later it was off to Macy’s to buy a new suit for my wifes foster care agency 50th Charity ball.  I loved the first suit I saw, and as I walked around Macy’s with it on looking for a suitable tie, a strange thing happened. People started treating me differently. It was clear and easy to see.  They were moving out of my way, giving me space, saying excuse me, all because I had a $500 dollar suit on rather than the usual $1.75 pair of jeans bought with a half-off coupon at Value World (the local thrift store)

You look at the jeans I’m wearing, and wonder if they are the $1.75 variety.  You start to itch.

"Later that day," I keep blabbing, "we all went to the high school football field and had relay races with the kids, and played a mean game of  freeze tag. I went barefoot, and pretended me to be a minimalist .  You and me both know I’m not," I whisper.

"And then Saturday night I watched a  Bill Moyers interview with  Luis Urrea an incredible man, who grew up near the Mexican/US border, and who’s latest book is about the garbage pickers in .  It was perfect research for a novel I’ve started about a family who travels to the marathon.  The plot is taking shape, and who knows it may go in the DNF pile (did not finish) but the characters are cool.  She was a self-mutilator as a teen, lost her first child, but starts a new life when her child dies, and gets her old scars covered up by a plethora of Tattoos and ramps up her exercise and starts marathoning.  She of course falls in love with her tattoo artist, who fathers her second child on the first day they meet, but fearful of another lose she won’t fully commit to him, and it’s only by allowing himself to be trained by her to run a marathon can he prove himself.  Of course, they never make it there, but the real test will come during the short, day before training run when they encounter a strange group of homeless people living amongst the Tijuana/San Diego drug tunnels. Inspired by true events.

It should be a lot of fun and a different tone.  I think I told you that The Jade Rabbit was written to the song “A hard Rain is gonna Fall” by Bob Dylan,  and that Stray was written to the Tune “Heroin”  by Velvet Underground. Well this novel is being written to the tune "Icky Thump" by The White Stripes.

'Icky Thump', your face shows fear,  since you downloaded the sample of Stray, thought it odd and pulsating and that I should perhaps be drug tested more often.  Of course, you read the first pages of The Jade Rabbit which seemed sweet, but any man who writes pretending to be a woman is just not right. And then there’s that Dwight Schrute bobblehead doll on my desk.

"Sunday it was a 6 mile recovery run, followed by some trampoline bouncing with the kids which is a great way to loosen up the legs some more.  Then it was off to the zoo.  Check it out:"

You glance up with courtesy at my cell phone and see: 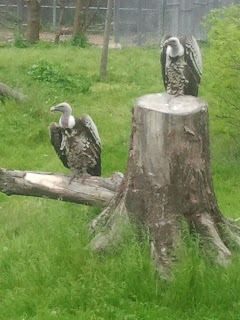 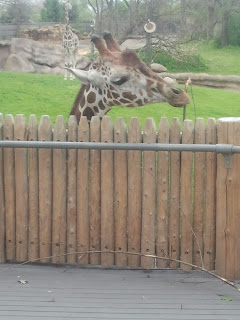 "Sunday night is perhaps the greatest night on Television,” I then explain.

You brace yourself, ready to hear me explain  how Sunday night Soprano’s on HBO is the birthplace of modern tv dramas.

"Game of Thrones was the best episode yet." I explain instead, "And Veep is simply tolerable, but who wouldn’t want to see Elaine from Seinfield be a cussing politician. But the show 'Girls' is simply incredible.  Cutting edge, so modern that it happens five minutes from now, and the best 28 minutes on television. In fact, last night….."

“ Sounds nice,”  you say, finally cutting me off and  moving your body signaling you have had enough. You pull out a Microsoft excel database that tracks how many times the customer service rep goes to the bathroom every hour,  number of days the tall woman wears those ungodly high heels, and the number of times I have come in late and annoyed you.  Your data updated, you go on with your day.

haha...okay, not going to lie i ALWAYS feel out of my element any time i have to go and actually get 'normal people' clothes, i feel like they can sniff out that 1)i have not style 2) i think anything over $20 is expensive and 3) i live in sweats/running clothes whenever possible. ;)

that said, ummm, i'm sorry as i love reading the details of ur weekend, but u 'yada yada'ed' over my fav part and must dish on the stats of those milers...either way i'm glad u crushed them, love the feeling! :)