Wrapping Ourselves In The Space Blanket: "Unwasted," in Review

To train for, run, and finish a marathon takes incredible motivation, and the spark to light this fire comes from all sorts of sources.  For one five year old girl, the inspiration came from wanting to wrap herself in the tin foil 'space blanket' - You know, those tin foil things supposed to keep you warm when your sweaty, slimy, mucus-filled body hits the cold air at the finish line. 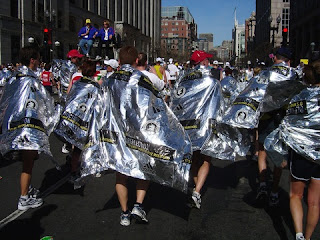 As a child Sacha Scoblic volunteered in the marathon, holding out water, and describes how “thousands roamed the park that day, but the special ones – the runners, the day’s heroes – all stood out, wrapped as they were in silver foil space blankets like gods amongst us.”  She slept that night, plotting to run a marathon, thinking “I would get a space blanket of my own.”   These snippets took place at the end of a hilarious, touching, and poignant memoir about recovery from addiction called Unwasted: My Lush Sobriety 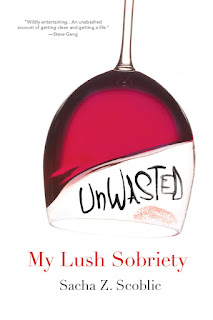 I first got a chance to chat a bit with the author on a site called Goodreads. If you are interested in reading and haven’t checked out the site, stop reading right now and go there.  Goodreads is a community where the lines between reader and writer are slowly getting erased, many of us are bits of both, maybe more one than the other, but it feels like a hippie writer commune at times. As a writer, I am able to communicate with those who have reviewed my books (either praising them or slamming the snot out of them) and have spoken with many writers who otherwise would have been off limits.  Unlike other social media demons, the site does not demand to be updated and is much less intrusive.  (See Ten Reasons Why I Love Goodreads)
But back to Unwasted.The author is a contributing editor at The New Republic and formerly a senior editor at Reader’s Digest. Unwasted is an entertaining, and illuminating book that traces the first years of recovery from addiction, and it simply made me 'happy' to have read it. It reads like a witty conversation, with amazing perceptions, and hidden truths revealed about the freshly sober thoughts of a great and fun writer.

As a recovering individual, I was constantly thinking "I did that!" or "Oh my gosh, someone else thinks that too?" So many experiences mirrored my own as well as others I know in recovery, and the way they are presented is fresh, clever, and with a near dark humor where the author never takes herself too seriously, yet never lets the stakes of sobriety be dismissed.  The novel didn’t have the oozing sentimentality most writers treat their addiction, and with just the right dash of AA program to make it a sweet, fun reflection on sobriety.
It was with less than a year sober and her last cigarette ash still hot in the ashtray, that the author taps into her adventurous spirit and begins her marathon training.  The regiment is pretty simple; two 45 minute runs with one weekend long run (hey, um that is exactly my training these days) and as is the case with marathons, it  squeezes and squeezes until it sucks everything out of you that you were looking for. Self-doubt fights the strong self-will during her training, like two dogs fighting, and as the old recovery adage goes, the dog you feed the most is the dog who will win the fight. The author uses the spirit of Marathoning support groups as a reflection of how she gains support from others in addiction recovery.
The marathon section of the book is just the dessert after a great main course, but it is fitting, because when she triumphs and  the tears comes at mile 25, when she conquers the marathon, it’s a final nail her sobriety hammers in the coffin of her addiction. The addiction carcass inside, however, is still alive and clawing to get out if given the chance, yet having fulfilled the dreams of her five year old self and earning a space blanket of her own, there's now nothing to fear.
Okay, that last bizarre analogy was mine, but don't we all wrap ourselves in the space blanket for so many reason, the cold is just one.  Like the author of Unwasted, it reminds us of our personal power.  Running becomes the physical expression of a spiritual battle.
My only fear when reading Unwasted was that the author would die at the end, because if she did, I should surely fear for my own life, since it was like I was reading about a version of myself in some alternate universe (a female, more talented version, sure) where before running our first marathons, we drank enough booze to fill the cups of 26 miles worth of aid stations and staggered through the city streets for many miles before deciding to run through them.

As it was the author lived, and then moved on to more difficult things, like staying sober in a wasted world, and trying to dance to the beat of Led Zeppelin.  Check it out on Amazon. Unwasted: My Lush Sobriety
The Jade Rabbit; $3.99 on Amazon

**Three 20 milers before the Ann Arbor Marathon Taper begins, about a million more dollars to raise until I can run New York in November.   ...and miles to go before I sleep.

first off, CONGRATS on ur marathon....aww, those foil capes are hard earned. :) thanks for sharing the review as well, i think u make a lot of great parallels there between the running and life...but isn't that always the case, i tell people running effects my world on so many levels!