An Ear Bud In Each Side Of My Skull

One element of my runs which I am sure improves my time is bringing along my Ipod for the ride.  This point was driven home during my last half-marathon when my Ipod froze up just as I was walking through the chute to the start line.
Music makes me run faster, makes my runs more meaningful, and I am now dependent on ear buds to make me go forward.  Yes, if given the choice to run a 20 miler with no water or no music, I would have a decision to make.
I understand the trend to run “naked’, i.e. with no electronic gadgetry, and how it can make you mentally stronger. Well, I have done a 20 miler on a treadmill with no TV, no headphones, and no other stimulus besides a wall in front of me, and did not feel mentally stronger, but in fact, a bit more stupider-er.
Distancing yourself from others during the event and distancing yourself from yourself, are two other points.  But even with my headphones on in an event, I can still hear the crowd, and more importantly see their faces, feel their presence,and feed off of their energy.  And the music, I feel, makes me connect more closely with myself. While I run I am never very social anyways. Sure, before I run I will talk to anyone in the chute or the expo, and if I see you with an event t-shirt on I feel it's an invitation to say hello, but during the process I don’t like to be bothered.

And so I have learned to love running with music.  Most any songs I listen to can be divided into those that are either on, or are not on, a running playlist. Some music I love just doesn’t translate to running, and some songs I find motivating while I run I would never listen to at any other time of the day. (Even though I fancy myself a hipster, my playlists are just as likely to include some songs from Glee, Journey, and Bon Jovi, or the soundtrack of Les Miserables.)
Music is such a personal experience. It is as personal as religion or politics, so to discuss your own tastes and expect it will touch and impact another in the same way would be to discuss something less than what music is.  For me it’s the intensity and richness of life personified, the volume of your internal world turned up, your insides made outsides and given a voice.  Music is listening to sounds that recognize the experience in you, and when my brain is intensified by running, the music is intensified as well.  The beat of the music mixes with the beat of  my feet and the lyrics mix with the whirlwind of joy spinning through my head.
The first time I decided to use my ipod during an actual race was at the Chicago Marathon, back when it was not allowed, but if you looked around, this rule was rarely followed. A handful of folks always had ear buds sticking in each side of their skulls.  I bought a cheapo mp3 player (for some reason I was terrified of losing my real one, even though it had served me just fine for a million runs) and my big decision was to carry it in my pocket and clip it on at mile 20. It was going to be a final push, the motivator to make it to mile 20 and the wind to carry me home.  Mind games, I was playing with myself, and ended up popping it on at mile 18 and wish I had worn them the whole time.
The key is a great playlist.  A happy, ready to charge song out of the gate, but nothing with too fast a cadence since the beginning is about saving energy, and then some casual tunes to dissociate to, and finally, some energy producing, soul-charging songs to carry you through the finish.  For long runs, I sometimes actually use an hour long podcast to keep it slow and smooth in the beginning, followed by a specially designed playlist that picks up the pace over the miles.
My favorites songs I pop in there twice, and it never fails that, during a good run, music helps my spirit transcend even farther, magnifies the run and its place in my life experience.

When talking isn't enough you need music, and when walking isn't enough you need running, and when you put the two together it's great chemistry
Rather than bore you with my list, here are just a few outtakes from songs that are well known.
--Most played first song on my marathon playlists:
'Running Down  A Dream' – Tom Petty
“it was a beautiful day, the sun beat down… I put the peddle down, to make some time.”
--Dorkiest Song on My Playlist
‘Now or Never’ – High school musical soundtrack. This whole song is about making meaning out of just 16 minutes of your life, and how you will be remembered by this moment. Well, tacky as heck me places the song about 16 minutes from the supposed ending of the marathon.
--Most inspirational song:
“Lose Yourself”  Eminem - a statement to the doubters, a song that builds with rage and immediacy like your heartbeat through the run. It doesn't hurt to be running the Detroit marathon, with the smell of Eminem in the air. And isn't a marathon just one shot, one opportunity? because if you blow it and "let it slip" away, chances are it will be many, many months or a year before you are back in the starting line. "So here I go is my shot, feet fail me not, this may be the only opportunity I got..." 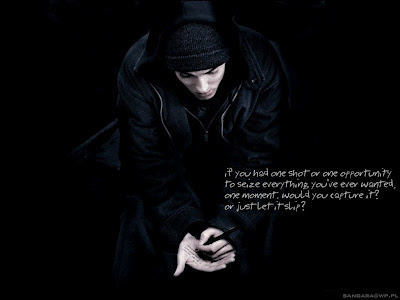 --Fav songs for their Running Beats:
Rear View Mirror and Go by Pearl Jam always pick up my pace, along with many others.
And of course the obligatory Rocky soundtrack, but I follow it up with "Going The Distance"
and The Machine, Dog Days Are Over.  This song seems designed for intervals.
--Some other random odd ones
Fighter: Christinia Aguilera, or Survivor, that Beyonce group.  (but shhhh, don't tell anybody)
Hurt (either the Nine Inch Nails or the Johnny Cash version.)

The Cave  Mumford and Sons
Back in the day, a friend of mine had an annual day long party (always on April 1st, hash bash in Ann Arbor) where he would play the entire Led Zeppelin collection. Every single song on CD, and this was certainly a marathon in its own rite.
So, I was thinking how an interesting way to run a full marathon with just one group on your playlist, just one, all of their songs.  I’m not sure who I would pick, but it would have to be something with an incredible beat, visceral with a screaming immediacy. Right now Florence and The Machine might be my pick of the day, although she may only have a half marathon of worth of song time.  (I am seeing Florence in concert this summer, and would certainly love to be in a treadmill while at the show, wouldn't that be something.)
Okay, if you're still reading and I'm not the only one here, I would love a comment about the song that fires you up, maybe something out of the ordinary since I have bared my soul.  Go ahead, no wrong answer.  Wham, Wake me Up before you Go Go... you say?  I can see that.

Eye of the Tiger and Anastasia's Paid My Dues (don't tell anyone and I won't mention Beyonce :P) and a song by Weddings Parties Anything called "A Tale they won't believe".
cheers

Certainly aware of Eye of The Tiger. Thanks for the feedback, I will check out the others.

Eminem's "Lose Yourself" and "Til I Collapse" are 2 of my top 3 motivational running songs. The 3rd is Muse "Uprising". Spoon's "Got Nuffin" is a close 4th. Great post!

I like everything I've heard by Spoon. The Dead's 'Sugar Magnolia' has a nice, happy beat, followed, of course by 'Sunshine Daydream.'

I never run with music in races. I feel more connected to the race then. I always run in training with music except I usually run my long runs with a running buddy and we talk most of the time. Lose yourself is one of my favorites and you can see my speed goes up when listening to it.

My absolute favorite "fire up" song is "All These Things That I've Done" by the Killers. I also love "Fighter" by Christina Aguilera and "What Doesn't Kill You Makes You Stronger" by Kelly Clarkson. those are my girl power songs.
A few others -
Let's Get it Started - Black Eyed Peas
Sweet Emotion - Aerosmith
I Get Around - Beach Boys
Centerfield - JOhn Fogerty
Burn it to the ground - Nickelback

I don't race with music but use it on some training runs. :) My taste is all over the place!