Flying To New York In November 2012
So, I am officially in for the New York City Marathon for 2012.  The non-profit, Covenant House, was chosen as a charity again this year, and my application is set for faxing and I have 8 months to raise funds for a great cause. 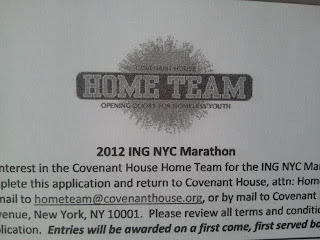 I am not going to pretend that a major part of my motivation isn’t  "damn, I really want to run that race" but it would be impossible to raise the amounts of funds without having some passion for the charity.  This is my second time doing a charity marathon, the first was inspired by a family member undergoing chemotherapy and I raised funds for cancer treatment.
I became aware of the Covenant house through my dad who, after a long successful career, wanted to find a cause to support.  He was very thorough in trying to find something he believed in, and didn’t want to just throw money or time at something that wasn’t clearly effective, needed, and with tangible results you could see with your own eyes. For example, one of his thoughts was that he wanted to drive around the city of with a van, a ladder, and some new basketball nets, and make sure every iron rimmed hoop had a net.
As kind of a financial guru, his services were requested by some non-profit boards, and he finally came up with Covenant house, and gets tears in his eyes when he talks of the services, and has found a second career as board chair of the Detroit chapter. Their focus is on the 17 to 22 year old population, often times those who have ‘aged out’ of foster care.  While most foster care families do it for the love and concern, some stop showing that ssme love when the monthly payments stop.  These are young adults who will fall through the cracks, never given a chance, and at such a critical place in their lives. Covenant house offers a place to live, spiritual support, much needed guidance for their transition to adulthood, and also offer a school where at-risk and needy youth finish high school.
Here are their words instead of mine:
Covenant House Michigan offers unconditional love, respect and hope to youth ages 13-22.
Covenant House Michigan is a sanctuary for young people who have nowhere to go. Kids who come to our doors have been abused and neglected, have slept on friends' couches or in abandoned buildings. These kids have been forgotten by those who are supposed to care about them the most. When they come through our gates, they become part of a family. Our staff, volunteers and donors carry out our mission based on faith and the belief that all of God's children deserve unconditional love, respect and hope.
Here's a link for more information. Covenant House of Michigan

I have met the executive director of The Covenant House, and his dedication is incredibly selfless, his charm is magnetic yet humble, and he can bounce among so many different worlds that he’s a spiritual chameleon. The clients, customers, or “their kids”, as they call them, have a genuine gratitude for the services.  After all that most of them have been through, there is no way I would be doing as well, and I can see why my dad was so inspired by the service.

Candle light vigils are done in the cold of the winter, to let others get a feel of what its like to be outside in the dark. And while many of its members are more homeless in the sense that they are living at a friends house, coach surfing, or in unsafe environments, many are indeed on the streets or at parks, and thus a Covenant House van goes out each night and does outreach, looking for those in need.
As a social worker and therapist for 20 years, I have worked with this population at different times, including 2 years at a runaway shelter, and I have also referred people to Covenant house and they have an incredible attention to the role they play.  Human services can too easily forget who they are, and become cold and impersonal, and that first interaction when you are in crisis is so crucial.  They got it down right, and now I have a ‘macro’, larger based reason to run this marathon rather than the usual, ‘micro’ interpersonal runs I usually take.

In fact, if you have read my novel,  The Jade Rabbit, Covenant House is the type of service the main character ,Janice is constantly encouraging Sharleen, the homeless 18 year old,  to get involved with. (Can't spoil the outcome.)
So, until then, I will see you in *But first, some training to do.
I’m scheduled to run the marathon on June 17th   and have some work to do. So far, I have done four 14 mile runs and one 15 mile run, so my long run distance is moving along just fine. I hope to do 6 more Long Runs, including three 20 milers and a half marathon warm up. However, my weekly mileage is a bit pathetic.
(I’ll whisper it.  25 miles or so, topping out at 28, one recently as low as 20, and 12 days completely off due to a major sinus infection)
I’ve always contended that someone could effectively run a marathon by just doing one long run a week, as long as it gets bumped up to 20 or so followed by a taper. I guess I’m testing that theory.
If I go splat in , bury me standing.

Click here for the link to my fund raising website. NYCM 2012 Fund Raiser for Covenant House Have a no obligation look!

**Anyone interested in information about running for Covenant House, I would be happy to provide it!**
﻿

Very cool Mark! I would love to meet you in NY. I am definitely running this year too. Love Covenant House too - sounds like a wonderful charity to raise money for. Good luck!

Cool. Go Mark go!
I only do 10km and 14km fund-raising run-walks (have achilles tendinitis, and last year also a broken toe but still ran). They are annual events we call "Mini Marathon" and "City2Surf" in Sydney. Come join us some time, there are many international runners.

Good luck with ABNA and your writings too,
ia