"You have to read the afterword," is feedback I've received enough times, that it only felt right to post it here. Check it out, just a short discussion on the setting of this work and the nature of mental health treatment, horror fiction, and Werewolves.

Who actually reads the afterword? Why, you do! That’s who, and thank you for doing so. The content from this novel begs a brief discussion. A few points of clarity regarding psychotropic medications, bipolar disorder, and a note on the setting.

I wrote The Hobgoblin of Little Minds with the perpetual concern and sensitivity that I could be adding to the burden of those living with mental illness rather than offering empathy and understanding. Similar to my works of addiction horror, there was a risk of stigmatizing those impacted by the disorder, versus shining a light into their lives. I sought out beta readers to gauge the tone and representation, and found, as I hoped, that the message was received as intended. Of course, this will not be true for all readers, but fiction should be dangerous or nothing at all. One of those dangers is that I perhaps missed one crucial message:

All of the above is true, but not always true, and not true enough of the time. Too often we minimize the consumer’s experience and the side effects of medications. We want others to take the medications for our own purposes, and disregard the full spectrum of their impact. Those who take psychotropic meds often feel they are losing themselves even as the devastating symptoms are alleviated. It can feel like you are losing your gifts and what makes you unique. Rather than seen as an act of self-care, to take medications can cause feelings of inferiority—like evidence that you are not capable to direct your own life. Even when medications are at their most effective, it can feel dehumanizing to need them in order to not decompensate. To cease medications can feel an act of bravery, and as much as that’s a false belief, we need to understand that rather than demonize it.

Innovations like peer supports in community mental health and patients’ bill of rights help create a more dignifying course of treatment. Research into the role of the gut in the treatment of depression and anxiety and non-invasive treatment such as Transcranial Magnetic Stimulation (TMS) are exciting new trends.

Medications work so differently for each person that at times it seems an experiment of one with consequences hard to predict. Very often the conditions targeted are made worse. This happens frequently with Bipolar Disorder where mania is triggered by anti-depressants.

The symptoms of Bipolar as presented in this novel are certainly of the more extreme in nature, but they are not uncommon in their occurrence. The psychosis, the agitation, the grandiosity, insomnia, hyper-sexuality, tangential thoughts, loose association, engaging frenetically in activities that have painful consequences— all of this is incredibly common. Beyond my twenty years working in behavioral health, before I wrote this work, I read numerous accounts of living with the bipolar in books such as Manic: A Memoir, by Terri Cheney, and Fast Girl: A Life Spent Running from Madness, by Suzy Favor Hamilton.

So many revered artists and personalities we admire have manic episodes, and there seems a risk when mania itself is romanticized. While it comes with euphoria and an elated mood, it is not a pleasant experience, typically, but a flurry of thought and energy which can’t be satisfied. Any actual productively is marked by something destructive. The often-ensuing depression makes one feel mocked by memories of previous levels of energy.

The premise of werewolf as a metaphor for these mood swings is a concept that was with me for years, and after I researched the topic, I found I was not alone.

“When I Became A Werewolf,” (Ohio State University, 2015) a research thesis by Via Laurene Smith speaks to this very topic. In her personal, brave, and fantastic thesis she, “investigates the parallels between depictions of the werewolf and that of bipolar disorder and depression and asks to what extent the werewolf can be used to reflect or even change attitudes towards mental illness.”

Another scholarly article that speaks directly to the topic is, “Folklore perpetuated expression of moon-associated bipolar disorders in anecdotally exaggerated werewolf guise,” published by the University Hospital of Cologne. The article hypothesizes that “Moon-associated signals, recently linked to rapid cycling bipolar disorder, may have triggered extremely rare instances of extreme manic and aggressive behavior that may be compatible with the folklore of the werewolf.”

The article certainly does not conclude that the moon literally causes lycanthropy, but instead suggests: “Rather than ignoring folklore, scientists may want to think what biological roots may manifest in folklore tradition and tales. Such awareness could fuel new insights and benefit causal understanding for individuals and populations in regards to the roots, causes, and significance of health and disease-associated traditions and tales, including the werewolf legend.”

In other words, the best way to tell the truth sometimes is through a work of horror.

Horror and folklore usually come from truth, just an exaggerated version or as metaphor. Japan really was destroyed by a fire-breathing monster, though atomic bombs, not Godzilla, was the vehicle of the devastating delivery. Townspeople really are terrified of the aristocrat in the castle, even if Vlad Dracula doesn’t change into a bat. And werewolves really do represent a dark, savage part of us. As my professor Eric Rabkin from University of Michigan explained, “Werewolves were often considered the villains in the forest. The Jungian self gone wild.”

I hope this story has added to the legend of werewolves, which in some ways is a forgotten trope and archetype over the last few decades which has seen the rise of vampires first, then zombies second. That is now changing. The moon is full and it’s now the time of the wolf. Look no further than Mongrels, by Stephen Graham Jones.

A final note about the setting. I’ve done hours of research into Northville Psychiatric Hospital. The place was legendary in my local community. There is verity in how this setting is presented. There were indeed tunnels connecting the various buildings, and the facility does have all the different rooms and capacity as described. It was a designated bomb shelter and asbestos and hazardous waste complicated its demolition. Locals did call the surrounding area “The Evil Woods,” a name derived from The Evil Dead films and created by Michigan native Sam Raimi.

Those who are intimately familiar with the abandoned compound, however, will certainly find something that may not fit—this building doesn’t have this part, or this is not that far from that. I hope you forgive me my minor trespasses.

The city of Northville built numerous state facilities on their land. I was amazed when I realized that Hawthorne Center, still open and treating adolescents, was built on the same parcel as Northville, under a two mile walk away. I liken it to Helen finding the identical Cabrini Green across the highway in Candyman.

In this sense, the work is historical horror, and I reached out to Alma Katsu, (Author of The Hunger and current master of historical horror) who suggested I take a tour of the building. That was no longer possible, since the hospital is now demolished, but I have parked at Hawthorne Center in the very spot Kori Driscoe parked her Toyota before walking through the evil woods to Northville Psychiatric. The land between is now developed, but it wasn’t when Kori took her pilgrimages to the dark underground.

I invite you to take a deeper dive and google “Northville Psychiatric Mlive” or “Northville Tunnels Nailhead” for some powerful images and blogs about the facility.

I do hope something from this work lingers, and that it has both entertained and raised questions. The best afterword is forgettable in contrast to the content it follows and vanishes upon reading. Before these words disappear, I want to sincerely thank you for reading them. 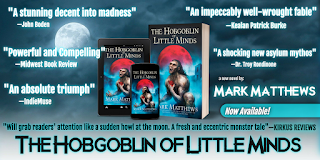