Who Dies Next on The Walking Dead? (And who, if they do die, I won't really miss)

Last night, The Walking Dead showed more flesh last night than ever, and not the eating kind. The more bad-ass Carol gets, the more she cries, and I love her for that. Darryl was the old, stubborn, 'go against the group's suggestions because my standards are deeper than yours' Darryl. Morgan is still the wise, insightful, spiritual black mana advising the lead white protagonist (Que Jon Coffee, Bagger Vance, Morpheus).

Due in part to its popularity, I think The Walking Dead gets dismissed as too 'pop culture' despite some incredibly deep themes. One need to only look at the 3/13/2016 episode which is worthy of a writing a thesis on. What it means to be a woman and a mother in this world was thrust into our chest, and we were left alive, unable to pull it out, but yep, still living. Reminded me of this lyric:


"They say that the son must bear the burdens of the father.
But it's the daughter, who's left to clean up the mess"
~The Cowboy Junkies.

That said, someone is going soon. Here's an interesting article that postulates who is going to die next. There's a list of potential characters in this article, but a few of them, if they pass, I don't feel much would be lost.

Eugene: lucky to be alive after his lies and weakness. He can be kind of sweet, and nice comedic relief, but if he goes, he's already lived longer than he perhaps should have. Sad, but there's not place for him in this kind of world. The afterlife will be more pleasent and accepting. 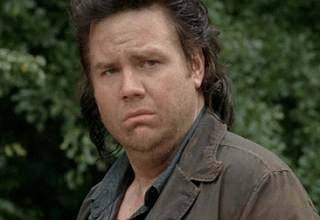 Father Gabriel: He's redeemed himself somewhat, but it's time for him to meet his maker. The arc of his story is over, his 'angst' gets old. When he does pop on the screen, I can't help but think, "oh,that's right.You're still here."

Spencer: we hardly knew ya, but you're on this list for some reason.

Abraham. (yeah, Abraham.): He's kicked some ass in his time, but he's gone gross, dumping partners who shouldn't have taken him in in the first place, and going to new partners who somehow can stomach him. His struggles do not excite me, his hair and facial hair a bit too Jesus-like perfect for this environment. Eugene and him have made their peace, now lets bury them together