A HEAD FULL OF GHOSTS, MONEY FOR NOTHING, AND WHY MARJORIE NEEDS ZYPREXA

THERE WILL BE SPOILERS. I WILL SPOIL YOU


Lots of things to say about A Head Full of Ghosts, but first a disclaimer: this is not a book review. This is a nearly incoherent blog post about buying books, about reader engagement, about body guards,  psychosis, family systems theory, and of course, about the book.

When deciding what to book to buy next, I am certainly guided by book reviews, but am less interested in the number of reviews as opposed to who it is doing the reviewing.  When those with tastes similar to mine are pimping the product, I’m an easy customer.

Well, A Head Full of Ghost was given such praise from those whose interests aligned with mine (Stephen King said "it scared the living hell out of me")  that it was a must-buy, but the price made me hesitate. It was $12.99 kindle, and  $14.99 paperback. I probably tithe 10% of my paycheck to writers through buying books, but when the kindle version is over $10, I usually wait for a price drop.

So, there I am on twitter, and  a writer tweeted how irritated she was when readers say they won’t pay a certain price for a book.  I responded how I am one of those, and often follow a 10 dollar limit. She told me I have no idea how hard authors work, how much editors cost, and how  there are a lot of expenses I wasn’t aware of,  like security for the author.

Well, it’s my dream to be killed by a deranged fan, so I guess I’m lucky that way.  Plus, I get my money for nothing and my chick (editors) for free.

Author Paul Tremblay himself responded on twitter after I had used A Head Full of Ghosts as my example. He pointed out that he had no say in the price but then tweeted,  ‘there will be a significant price drop next month.’

Now there’s a guy acting against his own best interest, perhaps. Soon enough, the book was $1.99 and a bookbub deal, and I snagged it up.

On to the book, which was excellent. A page-turner.  The kind of book you say, this is the kind of book I’ve been looking for. It stays with you when you aren’t reading it, and calls you back.  It is the kind of horror book that the mass audience reads, but then says, “that wasn’t really horror, it was about a family and real characters,” as if other horror is not.

Lots to be amazed at about this book, and one of them was the skill at which Tremblay got into the point of view of  eight year old Merry, and then the adult version of this same character. I loved the secret pacts that siblings Merry and Marjorie had, always having their own negotiations and treaties and events with their parents fully unaware.  (In my family, my siblings smoked weed in the garage and promised me a present if I didn’t tell on them). It is no coincidence that these two characters have similar names, for while they are distinctly different, they compliment each other like Tyler Durden and the narrator of Fight Club.

The book was self-reflective, examining exorcism movie culture via the voice of the blogger who pointed out parts of the story that were ripping off other exorcism books and movies, and used this to beg the reader to question if Marjorie wasn’t mimicking what she’s seen.  This part was straight up fun. It was a conversation you have with someone who has geeked out just a bit more than you, but not so much that you can’t listen to them all day. Using blog posts as chapters seems overused these days, but I enjoyed the blogger in Head Full O’Ghosts more than most I spoke with.

The reality show dynamics struck me as sincerely done. Another stress to the family. Far from glamorous. Real House Demons of Orange county

I rushed through the first 50% of the book, but then slowed down because I didn’t want it to be over so fast.  There are so many ways this book could go,  I tweeted out before powering the kindle off one night, and then as I lay in the dark, I thought of my own children in their rooms, and waited for the terrifying sounds  that might come should a demon possess their soul. Possession stories tap into a parent's worse fear that they  don’t know what the hell they are doing and are powerless to stop their children from suffering. The forces working against them are too much, and their hopes and dreams are slowly being vomited out their daughter’s mouth, (shortly after their head spins and they crawl on the wall) . The powerlessness of Regan’s mother in The Exorcist is what scared me most.

Here’s where some spoilers come in, so For God's Sake, GET OUT! Get Out!

There wasn’t nary a demon in A Head Full of Ghosts. Not really. I wanted demons. I wanted possession. Sure, I wanted twists, like maybe so and so is the one who is truly possessed, but the idea of no demons at all?  Everything was faked? I ain’t hearing all that.

The book played on our expectations and then gave us a left hook, the real demons are us. Families fighting, all of them damaged goods, damaging other goods, and poisoning each other in the end.  A child acting out in order to play the role as the sole focus of the family’s pain. This is straight from family systems theory.

I don’t think I am the only one to be disappointed that there was no apparent demon.  I wanted to see the devil, God Damn it, not a mirror. I wanted something with horns so I could then say , “come into me, come into me!” and then jump out the window.  Instead it was just human nature, and hurt people hurting people.

There was some ambiguity regarding the question of if Marjorie was truly possessed.  I was left wondering how did that drawer open? Who really poisoned the family? Was the narrator herself a bit possessed? (She was certainly wounded from it all) The book lends itself to a reread to pick up on details that I am sure I missed first time through, but upon my first read, it didn’t really keep me guessing. There was no possessed girl, just one fucked up family. Not so fucked up, however, that it might not be yours.

Perhaps we as readers are as guilty as the parents of the family for jumping to this conclusion. We also thought it was a possession. And, like Marjorie, we had A Head Full of Ghosts at the end, voices arguing with each other about what the hell is going on.

The most terrifying part of the book for me was the moment during the exorcism when Marjorie says, with a sincere child’s voice, "I'm scared and I'm cold and I want it to stop." She thought she could go through with the exorcism since her family needed her to do it --needed her to be scapegoated. needed her to be reality show fodder – but she changes her mind mid-way, asks for help, but nobody helps her. (of course not, for the devil is full of tricks).  When her parents don’t come to their child’s aid due to fear of demons and allegiance to the priest’s requests, not to mention the importance of catching everything on reality TV; that moment was worth ten dollars plus change.

Not sure if the author intended it so, but I did see Marjorie as suffering from psychosis. In my day job, I deal with psychotic patients who hear derogatory voices every day.  (despite mass media depicting otherwise, ‘psychotics’ are rarely killers, it is usually those with an Axis 2 diagnosis. Big difference) Marjorie seemed to be truly suffering from psychosis and needed zyprexa, grounding skills, education, and understanding more than a priest.  Upon rereading some of the passages, the ‘demon’ Marjorie warning her family how they are all going to hurt, (in so many words) could as much be the words of a confrontational family therapist as from some devil.

Buy this book and tell me what you thing happened. I’d be happy to hear. You’ll probably want to talk with others about it, about what you liked and didn’t like, and that’s because it engages you so much. Chances are you will not feel indifferent and it will leave you with your own head full of ghosts. In the end, that’s the power of fiction, and this is the kind of book they make sites like goodreads for.

A HEAD FULL OF GHOSTS ON AMAZON

PS: if you are worried about paying full kindle price, as it's back to full price now, I'll make you a deal. email me here after you buy the book, and I will email you back a gift voucher to download MILK-BLOOD, absolutely free. (That's like money for nothing, and your MILK-BLOOD for free) 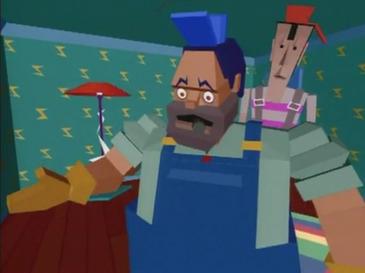 That's a nice little bonus you're offering.
I enjoyed your post, Mark. :)

Yes, you spoiled me.

Unfortunatelly the deal doesn't work for me.

And you're right: More than $ 10 for a kindle version is too much.