A review of the upcoming novel
"Runner”
By Patrick Lee
(I received an advanced review copy from St. Martin’s Press) 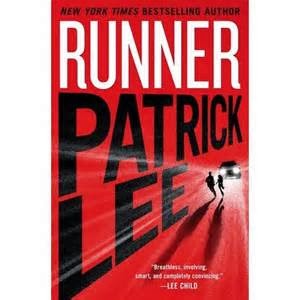 I went into this book with no previous knowledge of the character Sam Dryden or author Patrick Lee, but it only took a few chapters before I realized that both were simply incredible. The title itself, ‘Runner’ attracted me, and the premise of stumbling upon a life changing incident during a night time run guaranteed I would take a taste. After that taste, I wanted more and was carrying my kindle with me everywhere in order to reach read chunks whenever I could.

Here’s what it's about:
Sam Dryden is a retired military man and spy extraordinaire who has left his work and some tragedy behind. During a nighttime run, he stumbles upon an 11 year old girl in trouble. She’s being pursued by men who have lost their prize possession and it’s clear they are desperate to get her back. After he helps her escape, he learns she has been kept in a secret prison by forces within the government. Change in plans, Retirement over! and his mad skills are once again engaged. Not only are his skills put to the test, but he’s forced to look at some old wounds and learn to risk love again.

What follows is an incredibly intriquing, plenty smart, believable, and ultimatlely a ‘fun’ read. There is high adventure, military maneuvers, and cool gadgetry yet it’s always the humans that steal the show. The novel respected the reader, was never insulting, and in return, you could easily trust where the author was taking you and that each chapter would be as cool as the last.

The premise seemed pretty common: “A super-powered being is created by an overzealous, unfeeling, military industrial complex.” and because of this I feared the novel could turn into a cliche-driven,’ cat and mouse’ thriller, but it never went there. It went to places I hadn’t guessed it would and was glad it wouldn’t. The reader is fed with perfect doses of teasers and plot turns, characters, and twists. I would like to describe them all but can't out of a noble no-spoiler code I have vowed to uphold in secret book reviewing rituals.

This "Runner” is part 'Watchers' by Koontz, part 'Carrion Comfort' by Simmons, part Jason Bourne project, and maybe even a bit "Wreck-it Ralph."  Wreck It Ralph? huh? I'd like to explain but can not. See above about no-spoiler vows.

"Runner" is an explosive, smart, clever, and original thriller that doesn’t just run, it sprints. Read it, and you may think twice about what is driving you to go for that run in the middle of the night. It just may change your life.


--The book is due out in Feburary, 2014. In the meantime, Patrick Lee lives in Michigan less than marathon distance from my house, so, I will be running to and fro outside his kitchen window. Check back later to find out if he invited me inside, where I expect to have gained an exclusive interview.
at December 04, 2013