World War Z, Sprinting Zombies, and All I Wanted Was A Pepsi

World War Z was cool.  It was fun. Not a single drop of buyer’s remorse here.  I did not read the book, which I am sure really helps in this case, because I had nothing to compare it to.
First off, the zombies. These are not your slow moving zombies. They aren’t even your fast running Danny Boyle, 28 Days zombies. These are sprinting zombies with energy.  Agile, Intense, with a quick foot strike, and MMA skills.  They will track you down, jump on your car, and head butt their way through your windshield.  12 seconds later, you are one of them.
﻿
﻿Any marathoner knows, with 3 Gu packets, a few Dixie cups of water, and the right weather, we can outrun the zombie apocalypse 3 or 4  hours and 26 miles at a time. Not these creatures. You’re better off pretending you are a World War Z zombie at your next race, then to imagine you are running from a zombie.
﻿ ﻿In fact, sometimes they move so fast, they lose that slow, scary persistent walk that has made zombies (and Michael Meyers and Jason Voorhees) so much fun.  They move in fast-forward motion, which is a great change of pace, and what's more, they even work together. The much heralded promo of the zombie’s scaling the walls is a scene that I thought the trailers would spoil. Not so.
﻿
﻿ ﻿ ﻿But the real reason I love the zombie genre is not due to zombies but the family, social, and political dynamics. What’s left of humanity gets squeezed like toothpaste, and we get to see what comes out.
World War Z has faith in humans. If you watch this movie through the lens of Mr. Rogers and instead of seeing the scary things, you “always look for the helpers,” you will find them here.  There are more Darryl Dixons than Merles here. The biggest statement in the movie may have been geopolitical.
This is more Contagion and Outbreak and military thriller than a Romero-like Night of the Living Dead derivative.  But I left happy. You know that feeling when you walk out.  Yeah, I had that one.
A few complaints:
1. The contrived scenario: Brad Pitt is a pancake flipping dad but is pulled out of retirement since he’s the only one who can save the world, and therefore everyone will sacrifice themselves for him. Of course all movies have to be like this, and it was easily forgivable.
2. Mirelle Enos wasn’t the strong determined force she is in The Killing, but instead was the doting wife calling her husband ”Baby” all the time.  The bad-ass Israeli soldier woman did make up for this a bit.
﻿
﻿
4. Pepsi product placement was glaring. (I’m being trivial, I know)
5. Brad Pitt was playing Brad Pitt.  You will never forget that. But I am very glad he signed on else this movie may not have been made and the cool factor made it fun. This was your Oceans 11 and 12 Brad Pitt, not much different.
The fact that the role he actually tries to play is a United Nation hero highlights the theme of teamwork and unity of this movie.  The message is one of hope. Of the human race coming together beyond borders.  In Night of the Living Dead, the savior was assassinated not by monsters but by a human in a (perhaps racially prejudicial) gunshot to the head. Not so here. The savior is met with his family and the fate of the human race looks bright.
So, rest easy. World War Z wicked- fast MMA fighting zombies can’t stop the power of the human race. We have what they don’t. Pepsi. Brad Pitt. The United Nations. And cool movies. Just enjoy this one.
For another fun take on zombies, my lovely short story about a zombie 10k run, Zombie Dash, is now free on Amazon. Yep, they are giving it away. And none of that 5 day crap, I mean forever giving it away. Because in my house, there’s no Pepsi, just Coke. 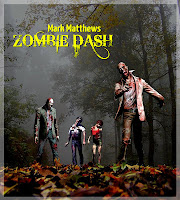 We should just start seeing zombie stuff together, you captured my thoughts on WWZ perfectly. I've been comparing it to 28 Days and that wall scene was so unbelievably intense. No buyers remorse here at all either, but then again, I also did not read the book.

I have to agree with you on all of this except one - I DID NOT NOTICE THE PEPSI!? Now, I am beating my head against the wall seriously wondering what is wrong with me and my brain. It must have been Brad Pitt, we'll go with that. I was intently watching Brad Pitt and didn't even notice the Pepsi - or the Zombies, yes, I could not take my eyes off them, right?!

My husband read the book and said the movie did not closely follow it, but he expects a sequel (or more). He liked the book and movie equally for different reasons.

Great review! ;) Even if I have to seriously reconsider my observation skills now...