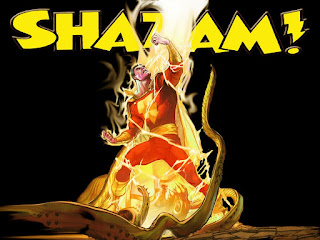 If you don't know what the SHAZAM app is, I'm going to tell you of course.

You're driving in a car and hear the perfect running song.  Maybe you have heard it a hundred times and can never know for sure what the name is. Maybe it's the first time and you just need to have the song to play again.

But what the heck is its name?

Maybe the DJ will announce the song at the end. Or maybe you will remember the lyrics and can google them later. Or maybe you'll be the 100th caller and can ask the DJ himself when you visit the radio station to pick up your free Lady Gaga tickets.

But never more. Now you can just click one button on your shazam ap, hold it up to the speaker and 'SHAZAM!" it tells you what song you are listening to and the artist.  It has never failed to retreive the song title for me.

I did test Shazam on various other noises around my house, and found some oddities.  For example, my daughter yawning is Ozzy Osbourne's "Over the Mountain."    My dog snoring is a never before heard before Mumford and Sons melody.  My own flatulence is Paul Simon's "Sounds of Silence." Go figure.

These minor problems aside, SHAZAM is my favorite app to both use and to say.


(Go get SHAZAM and test it on the song below)

The shop is now owned by charity Norwich HEART, which took it over in August 2009 from a successful campaign by
Norwich Evening News to maintain the shop open. He moved in having a friend, while Taylor-Mc
- Coy, earning just $410 each month in government assistance, checked in to
a shelter. Make sure that you're using clean towels and clothes.

I LOVE Shazam! My husband didn't understand why I needed to Shazam songs when it says right on the radio, the Title and Artist, but am I ever going to remember that? Umm...no. So when I need some new songs for a playlist, I go scan through all the songs I have tagged. It's almost exciting because I never remember any of them! :)