20 Mile Run and My Own Confusion

I went on a 20 mile run yesterday, the 2nd of my 3 preparing for the Bayshore Marathon. It was a ten mile out and back.  It never occurred to me that my current residence is just about 10 miles from the front door of the house I grew up.  So, I put on some vaseline armor, eight bucks in my pocket, two gus, and headed out the door.

I ran by the cemetery near my old house. When I would watch "Night Of the Living Dead", this was the cemetery that was identified as the biggest threat to survive the zombie apocalypse.
﻿
﻿
﻿ I ran by the turkey farm a 1/4 mile from my old house. It was deserted, except for some Geese who seemed to be pecking at what smelled like left over Turkey poop.  If you read my novel STRAY, this is the setting where the main character grew up, and eventually used as a sanctuary for Stray dogs. But there were no sign of any strays, except maybe me.
﻿
﻿
﻿ ﻿I ran by the beer store where I bought enough Bud Lite and Busch beer to feed an army of Clydesdales. This was long ago, and they had new owners. Still, I stopped in and grabbed a one dollar water. I looked strange in tights and with sweat and slime on my face.
﻿
﻿
﻿ ﻿ Of course I ran through my old neighborhood, ran by houses of old friends, but I didn't really have moments of epiphany that I've come to expect from Long Runs. My thoughts and feelings were just being whipped around my head. I think I attribute this to the 30 mile per hour winds. The wind was such that in some directions I fought to just move forward, but in other directions, I was being pushed forward by cosmic forces. Wind whipped through one ear and out the other and anything coherent flew off like a paper receipt you let blow from your fingers.

This has been one of weirdests week we've had on this planet. And to quote Jack Kerouac, I have nothing to offer anyone except my own confusion. 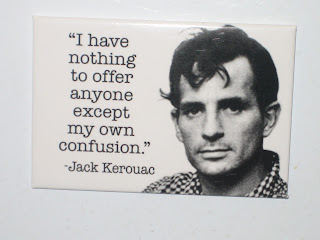 Email ThisBlogThis!Share to TwitterShare to FacebookShare to Pinterest
Labels: 20 mile long runs, long runs, nothing to offer but my own confusion

Love the receipt simile. Glad you got your 20 miler in, and cool that you were able to re-visit the past like that.

Going back in time is always an interesting exercise. You just never know what memories are going to emerge from the millions stored away that you thought you'd forgotten.

Post writing is also a fun, if you be acquainted with afterward you can
write if not it is complicated to write.

Also visit my homepage :: How to get rid of stretch marks