8 days of scorching sunshine on a Caribbean cruise, hopping between islands on a floating pig trough and gorging on the buffet, taking midnight strolls in the dark of the night with the moonlight glowing down and heavy winds ready to scoop me off the deck and into the deep blue sea. At port stops, I was offered some Jamaican marijuana and some Cuban cigars, in Grand Cayman I heard  bankers wearing bermudas making business deals on the beach. And then it was on to my favorite spot, Cozumel, where everyone’s an amigo and the Mexican pleasantness soaked through all the sunscreen and deep into my pores.

And don’t forget the staple of all cruises: overworked, underpaid workers who have been plucked from poverty-stricken countries and taken away for years so that they can fold up animal towels for your kids. (that’s another story for another day) 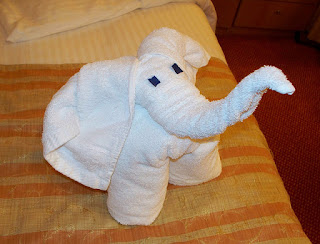 All of that, and I got in 4 glorious runs in 8 days. Vacation runs are filled with the greatest joys and fueled by invigorated legs. I have a list of unwritten rules about running on vacation that I go by.  Here they are, unwritten no more.

Rules For Vacation Running
1. Be safe. You’re a stranger in a strange land. Carry cell phones, mace, run with partners.

2. Wear your running shoes to the airport for comfort. They won’t get mangled and disfigured in your suitcase, and Airports are a great time to stretch your legs with a run. If you feel weird running through the terminal while the rest of the folks take moving sidewalks, hold a boarding pass in your hand, and keep an anxious look on your face. You’ll surely look like you’re trying to catch a flight. I didn’t count this in my above mentioned 4 runs, but I logged close to a mile on a layaway on the flight down to Texas.

2. Exploit your freedom and your environment and do something different. As that famous Jamaican bartender said in the movie Cocktail: “Anything else is always something better.” (One of the lesser known  “Coughlin’s Laws”, far behind, “Bury the Dead, They stink up the place”)  Try to run a path that would be impossible to run at home. If you are from the flatlands look for hills, if you’ve been stuck on a treadmill, run outside, if you’re from a Michigan winter, run on beaches and Caribbean islands. Tap into the core of your exotic locale.

3. Take advantage of Jet-lag.  Traveled West? You’ll still be able to sleep and slow wake, but have time for a predawn run just as the sun rises. Some of my greatest memories are due to jet-lag that allow a 5 or 6 am run on the pacific coast, including this last vacation where I ran Galveston beach.  The sand was hard enough to run on, and an orange hue outlined the horizon for the first 3 miles until the sun rose over the gulf. It was a gorgeous, paint by number morning sky, (looked so phony.)   Angels and humans all gathered at the beach to watch the sunrise.  During a 3 week trip to China which is 12 hours opposite of us, I took a few 3 am runs where statues of  Budhas came to life and watched me from the shadows.

4. Check for a running event in the area. You never know. I stumbled upon Chicagos R'nR half-marathon last season that just happened to be there the same weekend I was visiting, and the early start of these races means less intrusion for the rest of the family.

3. Hi-tech, dry-fit, race event t-shirts are perfect for vacation. For one, they can be conversation starters with other travelers or locals. Then, of course, you can wear them on a run, and afterwards, bring them into the shower with you, shampoo and soap them off, hang them up to dry, then overnight they’ll work their magic and you can wear them stink-free to the buffet the following day.  They also make great pajamas, a tourniquet if you get bitten by a shark, they pack light, and don’t get wrinkled in your luggage.

3. Run for joy of it, you’re on vacation. Even if I’m training for an event (I have about 70 days until I taper for the Bayshore Marathon) I take myself off the grid. I don’t worry about weekly mileage or targeted workouts. It just puts undue pressure on that day

4. Doesn’t mean you can’t push it.  Fartlicks are in the air every vacation run, everything is a fartlick.  I don’t measure my speed, but run faster when I get the itch, and turn it up for a few strides, a few miles, whatever seems to fit, but no pressure to keep it going. I pull back or even walk break as needed, especially when I smell an interesting tangent in the air.  If it looks interesting, I veer off the beaten path and take the road less traveled.

5. As far as roads traveled, ask around for paths or popular running trails in the area. But ask the right person, since chances are, the person you ask won’t realize how far you run. (Beware, they may call you a jogger) so look for a runner or ask the hotel staff if they know where the runners go. Better yet, call ahead, google it, and look at message boards.

6. No matter what, it’s a vacation run. Expect cosmic powers to be revealed and visual wonders to appear, all powered by refreshed legs. You haven’t really been somewhere until you’ve seen it through the eyes of a run.

Just some rules to go by, but a vacation run is unique and to be cherished. It was a year ago when I took a run along a San Diego highway trail in the dark of night, with homeless men laying in sleeping bags all around me, and the ideas started to flow and the seed of my next novel was born.  The results are in full bloom and are coming soon.

Now it’s back home to my regular running routes, which are about to get dumped on by 8 inches of snow, but I’m tanned, rested, and ready. No problem man, Good Day Amigos.  See you at the buffet. 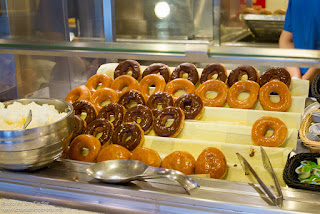 I am headed to Mexico in a few weeks and cannot wait to take a run around the area. I have 7 miles that weekend and when the travel agent said "good news there is a gym" I replied with "Mexico is my gym" to which she looked perplexed. Haha.

I ran in Mexico last year, alone. I figure if its my time, it's my time. I asked for directions to the town and went for it. A little scary area but then all was good. Also I started at 7am and anyone up just thought I was crazy since it was already 80 out.

I try and plan a run with every vacation! They are my favorite and great stories come of it.
I always wondered what I would do if I was bitten by a shark....

My vacation runs are almost always the strongest memories of different places. The new scenery, the suspense of looking for a toilet that seemed to be there on Map My Run and has been subsequently the target of arsonists, the excitement of squatting behind a tree and hoping that you won't be discovered and ejected from the country because you've sullied their soil. You can't buy memories like that.

My favorite runs are vacation runs! New places. I ran on vacation in Hacking hills Ohio. Who would have thought it was my scariest run ever. Redneck central with big dogs unleashed everywhere. Crazy!

The first time I ran truly barefoot (as in barefoot, skin to ground) was last February on Anna Maria Island...oh how I long for those sandy beach runs during this midwest winter!

Vacation runs are the stuff dreams (and apparently, novels!) are made of.

Thanks for all the comments folks. I never fully mentioned this, but I try to make sure to add anybodys blog to my blog roll who comments.