Yes, snow running is here. Unlike last year, just got dumped with about a foot of snow so far, and there hasn’t been the usual warm up to 45 degrees for a day or two, so the streets remain snowy and icy, and sidewalks remain unclear.

So, it's time to write all about Winter Running, with tips and inspiration and running gear. But I’ve already posted on this about a year ago.

So, here’s what I am gonna do instead: I’m gonna be like Runner's World, Men’s Fitness, and most other fitness magazines and shuffle the words around, put a new title on top, and then add a picture of someone with Rock hard 'I've deprived myself of chocolate cake' abs, and a ridiculous smile, onto the cover, and regurgitate this article as new.

Bamn!!! 2012’s article called "Great Winter Running Tips" becomes "Hottest Tips To Run In the Snow” for example, or, to be specific my post “Running Blood Boils Hot” becomes “I’m The Same Article But with A New Set of Abs On The Cover So Buy Me”: 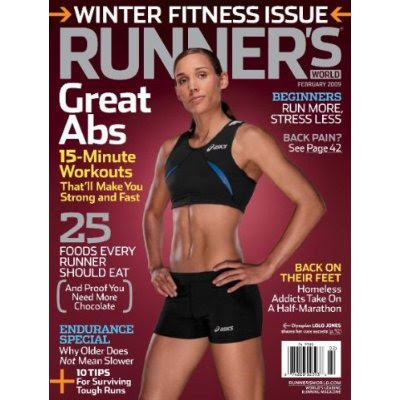 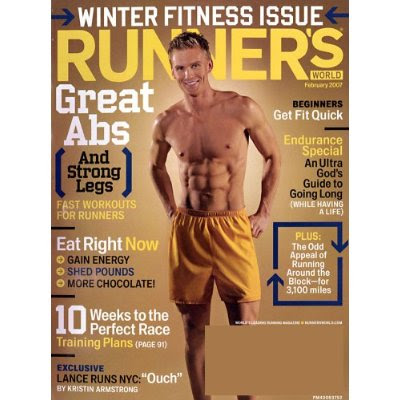 Or I can just paraphrase my article from last year and add to it.

If you're looking for clear, nicely manicured and salted pavement, find dry areas by being creative – big-box store parking lots when they are closed or big churches or community colleges during off-hours. Also try something new and run on fresh snow in open fields which is easier than half-trodden, frozen-over jagged snow.  And don't be intimidated because once you get out there you'll heat up in moments, a hat and a zippered jacket control temp up or down, and it is wind, not cold or snow, that is your real enemy. No matter what, remember you are a badd-ass for running in the snow, and this makes you rock.

And here’s what I want to add”

I bought a pair of traction aids on Black Friday when I dipped into Running Fit just by chance since I was next door at Olgas.  I’ve heard people recommend them, but was skeptical, both of if they worked or not and if I would even use them the way snow has been noticeably absent from our winters..  The running fit dude recommended ‘duenorth' brand rather than yaktrax since they were a bit more natural, flush to the ground, and with less interruption to your gait.  I bought them and kept them in their package, in the bag with the receipt ready to return as needed.  But the snow came, and now the cleats are suctioned onto my second pair of shoes in a way that reminds me of how Alien used to suction onto someones face, so I suspect they will never be coming off.

I couldn’t make myself slip, running on ice and packed snow and packed-ice covered snow, all of it.  The strange thing was, I avoided the clear cement, since it made them go  clippity cloppity. And I have to believe too much straight cement will wear down the cleats and widdle them to nothing.

My first run in them was a late-night run under a clear sky, where the blue glow of a nearly full moon reflected off the snow tops. Something you just don’t get from the basement treadmill. Not to mention all the fresh air smacking my face. 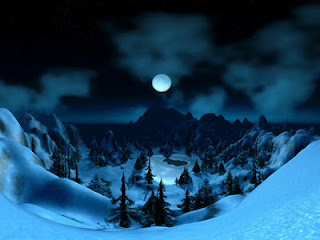 For longer runs, I still find it takes a lot of work to find a way to put in the high mileage in the ice and snow, and my ankles would jar side to side until they would surely snap. So I still did my 14 miler on the treadmill watching the movie Looper (both the run and the movie were good).

Yes, the treadmill frees up many options to train, but treadmill running feels more like 'training' and not pure running.  The cleats free up options to run outside as I'm supposed to.

Can't wait until next year at this same time, when I can write this same exact post, throw up a few different pictures (maybe of my hairy, more santa-claus shaped, I love Pizza and chocolate, abs) and call it new.
at January 02, 2013

Ha ha so true about the running magazines...always regurgitating the same stuff! Sometimes I think I must be going mad... I have yaktrax and love them. They are really good on ice, great on packed snow, crap in powder but I guess that's what snowshoes are for. I also avoid uncovered pavement not only because of the clip clop but also because they tend to slide, and of course I'm sure it's not good for them. Here's to winter training!

Have you tried screwing your shoes already? http://www.skyrunner.com/screwshoe.htm I've been meaning to, but haven't yet.

You missed a big one Mark. If you go to the Metroparks, they plow and salt the running/bike path(at least they do at Stony Creek). I use the park all winter for my long runs.

Thanks for the info of the due north cleats! I have looking into getting a set seeing that this stinking snow/ice is not going away!