Les Miserables and All Things 24601

The list of things I could talk about all day:
“My Children, my marathons, my novels, and Les Miserables” 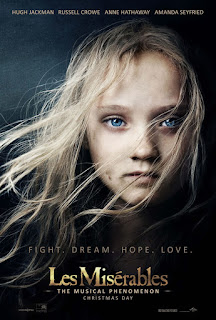 I’ve loved the musical like none other. No, I don’t love it like a 12 year old lives Justin Bieber, and there’s no posters on my wall like the one above with the messy face of child Cosette sweeping to the tune of ‘Castle in the Sky,’ but, a “24601” Tattoo has been given serious consideration. And, to my daughter who has been known to answer my proclamations of ‘I love something’ with, “Well, then why don’t you marry it?” all I can say is, “polygamy now, Damn it, Polygamy now!”

1.The sense of justice in the world of Les Miserabes.  There’s a spiritual karma that comes back to each character, and an ultimate goodness of God, but this is mixed in with darkness and evil and misery. Tragedy happens randomly to good people at the hands of evil, and this creates an abject desperation, yet always with tiny shreds of the permanence of hope. So, even though the iron faith and conviction of Jon Valjean leads to his salvation and the realization that, “to love another person is to see the face of God” ~ you can be full of love and dedication for your child, like Fantine, yet still, “The lions will come at night, with their voices soft as thunder, and they will tear your dreams apart.” 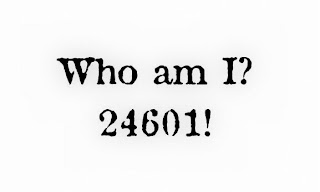 I think I want to believe I’m living a Jon Valjean life, but I may be a little more Fantine.

((feel free to walk away now, excuse yourself, pretend you got a text from your kid, go to the bathroom, do something,  like I said, I can talk about Les Mis all day, and I’m just getting started..))

2. The genius of story-telling.  There’s such an array of stories and criss-crossing of characters, each of whom is the hero of their own story.   Every minor character of Les Miserables exists for their own sake, and if they came to life, they wouldn’t say “I’m a minor character in somebody else's story” they are the heroe’s of their own story, dealing with issues from the very grand, to the very small.  There are revolutions happening on all levels, not just the streets, but in the minds and hearts and worldviews of the characters.  This is exemplified by “One Day More” where relationships, governments, families, and belief systems all come to a head with just moments of time before they get played out. (which, if you are in a theater rather than the cinema, means it’s intermission)

3.  The power of music to exemplify and display feelings.  It’s emotions with the heat turned up, boiling out the purest parts, and with the first note of every song on the songtrack, I’m taken to the emotion of the corresponding scene.

So, with all this going into Les Miserables, I have been waiting and waiting to see the movie.

First a digression: I was torn which move to see first, Les Miserables or The Hobbit. The Lord of the Rings trilogy was unlike anything brought to the big screen, so I had to see The Hobbit, but, as expected, The Hobbit truly disappointed.  If you’ve seen The Goonies, you’ve seen The Hobbit. And oh, the irony that after a trilogy about the evils of Greed in seeking the all powerful “One Ring To Rule Them All”, we’re left with the greedy remains of turning a small book, The Hobbit, into three greed-driven movies rather than just one and done.

Back to Les Miserables, where I went into the theater with a bag full of smuggled in snacks, fully prepared to sing out loud the parts of Jon Valjean until I was kicked out of the theater, and then sneak back in and bellow out, even louder, the lines of Javert.

It took a few minutes getting used to seeing it on the screen rather than a theater, but five minutes in, I adjusted and it overwhelmed.  And while the move was slow at times, it seemed almost like a movie tribute to the musical rather than a movie in it’s own rites, and that is what I had hoped for, a strict translation, and I could have sat through it again as soon as it was over. 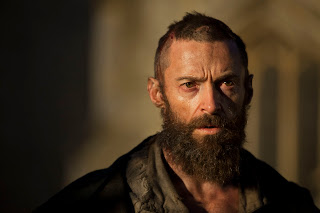 Hugh Jackman was splendid and is a true versatile showman and artisan, but, (and I know of no other way to describe it but,) I never felt like I was watching Jon Valjean but was rather watching Hugh Jackman being Jon Valjean.  When a role is done just right, you forget who is playing it, and I didn’t with Hugh Jackman, I was always cognizant of who it was. Still, he was brilliant. 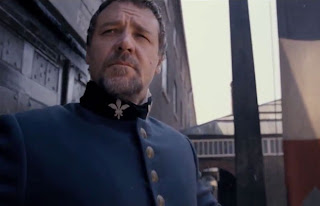 Jon Valjean’s foil is Javert, a black and white thinking, overly-judgemental, non-forgiving authority figure who’s obsessed with catching the fugitive and bringing him to justice.  Russell Crowe played Javert, and I didn’t care that his vocals didn’t match up, but he simply needed to be more intimidating.  In every stage presentation I have seen, Javert is taller than Jon Valjean, with an upright march as if he’s always a solider, always on guard, and that Jon Valjean should be afraid when the two were together on screen.  I just wasn’t afraid of Javert – maybe if Crowe had put a little more Maximus from ‘Gladiator’ in his role. That said, Javert’s suicide, such a great internal combusting scene, played wonderful. 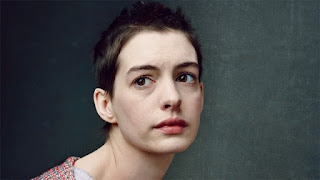 As Fantine, Ann Hathaway deserves every award bestowed upon her. Her sorrow, her misery, the vast injustice done onto her, was played out in just a short bit of screen time, and she gave me one of the most moving moments I’ve ever had in a theater, or experiencing any bit of art for that matter.  I cried a bucketful of tears at her version of “I Dreamed a Dreamed,” and then another bucket when she appears to Jon Valjean at the end.  The close up of her face as she sings was incredible, and it seemed not like I was watching a movie but was a voyeur sneaking a peek at a humans darkest and most private moment. 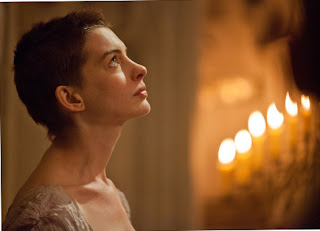 Kudos, as well, to the number “Empty Chairs and Empty Tables,” which was done more powerful than any I have seen. I’ve never felt it like I did watching it on the big screen, and Marius was brought to life much more powerful than any live version.  Eddie Redmayne, if I was Jon Valjean, you can marry my daughter, and until a Marius such as you portrayed comes along, I’m keeping them hidden.

The class warfare of the society of Les Mis, and seeing the faces and expressions close up rather than from 20 rows back, made the poverty more gritty and more real.  But the barricade looked oddly not much more elaborate on the movie screen than it does on stage. But never mind, I felt the group of revolutionaries more intimately by seeing their youthful faces up close than I had in the musical version. 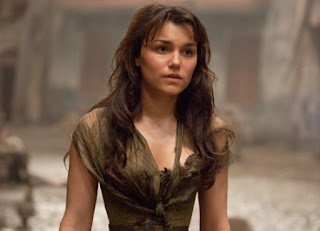 Eponines “On My Own” had this odd music video appeal and was way more polished than the other numbers. I’m going to pretend to be smart and link this to her being from an original production of Les Mis, she actually played Eponine in a London production of Les Miserables and also starred as Eponine in the 25th anniversary production, so she was not chosen for the movie exclusively. 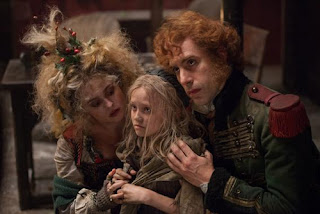 The Thenardiers played by Sacha Baron Cohen and Helena Bonham Carter were just mildly cute. I could have taken a pee break and not missed anything. The ‘Master of The House’ number is great theater during the musical version but did nothing for me in the cinema.

Cosette, I’m sorry to say, you are just vanilla and never mattered much to me in any version.  You are mostly static. Your conflicts are minor, you are there for what you represent rather than anyone who undergoes much of a change. Thanks for showing up though, since without you, there’s nothing.

When the whole ensemble sings together it is at its most powerful, but I’ve heard the individual vocals getting hammered by critics. I wasn’t looking for a perfect vocal performance.  I can download that from itunes. Sure, they could have lip-synced a studio take, but they sang it live in each scene, and what I wanted was the emotion and the backstory leading to the moment of the song and that’s what matters. I wanted an actor who sings, not a singer who acts.  (if you want the true backstory, read the long but actually quite readable novel, and you’ll see, among other things, the wooing and romanticizing by Fantine's lover before she is abandoned.)

So, I bought the soundtrack, which for now just includes the highlights (with some confusing reasons why they left out certain songs, WTF?), but when the full version comes out, I ‘ll certainly be buying it as well, and a good half-marathon worth of songs is waiting.

In fact, I’m looking for someone who is willing to dress up as Javert and pace me at my next marathon. They must be tall, intimidating, and be able to run right at my heels while continually singing The Confrontation, Stars, (There, out in the darkness, A fugitive running,)  and at the end, plunge themselves to their death after a rendition of Javerts Suicide. 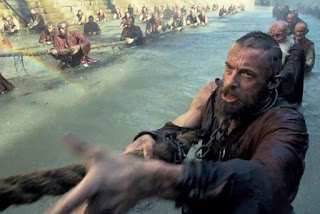 Look down, look down, you're standing in your grave

i'm so poor/cheap i literally haven't gone to a theater since i think before last year...buuuut, i've been waiting for this one. thanks for ur thoughts here, i think i'm gonna have to tell my neurotic cheap butt to shell out. :P

Okay, I don't know what the heck happened. I hit post and it deleted my comment. Perhaps I'm not meant to comment, but I'm persistent so I'm trying again.

Original Comment:
Yet another thing we have in common, Mr. Matthews. I have been in love with Les Miz for too many years to count. I'm sad that I haven't seen it yet, conflicts and money, but now I'm sad because you should've put a spoiler alert. hahah Now when I do see it, I'll not only be hearing MY voice critiquing, I'll be hearing your critique as well. Dammit.

I must say the parts of Anne's performance I've heard have been astounding. I am a huge Lea Solanga fan for Eponine, the 10th Anniversary soundtrack was my worn out copy. However, Sam has her good qualities too ☺. "A Little Drop of Rain" is quite possibly one of my ALL-TIME favorite musical numbers.
.
GREAT post, all in all. Thanks for sharing!