I’m not much of one for race medals, but I’m keeping them around to be cremated with.  Seems like it will make a good mix. Also, I’ve heard that if someone is in a coma, and you put a marathon medal in their hand, they immediately wake up.

But, if you could,  what race would you be buried with?

If you were trapped on a deserted island, what race would you bring with you?

Would it even be a race? How about a route by your house?

I just read an article about a funeral procession that went through a Burger King drive thru because the man who had died ate a whopper everyday.  The funeral procession ordered 40 whoppers and put one atop his flag-draped coffin at the cemetery.  The family stated that the display wasn’t a joke, rather a happy way of honoring  the things that brought him joy.  (He was 88, by the way, which, if you guaranteed me that age now, I'd take it) 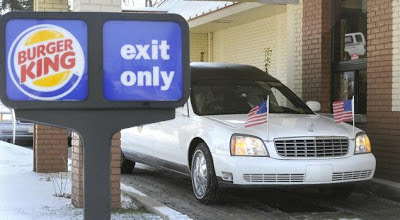 Wouldn’t it have been cool if God had woken him up and allowed him just one more whopper, one more bit of joy?

If there had been a Burger King when Lazarus was raised from the dead, certainly a cheeseburger is the reason he would have been summoned forth.

So, pretend you are 'Lazarus the runner' for a second.

Yes, you are dead. You are snug in your casket, traveling by hearse on the way to your grave.  (You chose to be buried rather than cremated, because you want a body for the zombie apocalypse, since how boring to be dust when that day comes).

Then suddenly there’s a knock.

Yes, it’s God, or at least some version of a big, glowing, warm light full of infinite love and complete and utter omnipotence.  He (or she, or it, or they) has a race bib in their hand.  They are offering you one last race, a do over, a chance to re-experience what brought you joy, like the first time you did the race. Your choice of events, a running do-over.

Not a bad reason to come back to life.

Because, this time within the crowd will be all your loved ones you’ve met through your life; all your teachers, your track coaches, your garbage man, your post man, the hygienist who cleaned your teeth and of course your family, both living and deceased. They’ll all be mixed in with the rest of the regular spectators, watching you, cheering you on, feeling your triumph, and you get to re-experience the same glorious finish experience with all them watching on.  Even all the pets you've ever had and loved will be there cheering for you.

Of course, there’s God and the hearse, waiting for you next to the post-race munchies, and as you leave the runners' area you have to jump back into your cozy coffin, get loaded back into the hearse, and drive to your grave site in cars with the little magnetic flags fluttering on top. (Never fear, unlike the race you just ran, this time, you get to be first.)

What race are you going to run? What one from your life would you like to recreate?  What race would you like to have as your last eulogy, your last statement?  And how cool of a funeral would that be, since many of us are most ‘ourselves’ when we run, at least internally if not socially, and isn’t a running event of the most intense experiences we have during our lifetimes.

I have a couple in my own in my head I’d have to choose from,  but I’m secretly hoping that the race I would choose has yet to be run, that my most memorable source of joy is down the road somewhere waiting for me.

Miles to go before I sleep. 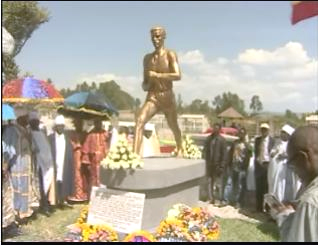 Crazy thought! Kind of cool though. Hmmmmm - so hard to pick one, especially since there are so many races I still want to do. Love the idea of everyone being there though. That is super cool. :) Miles to go for sure!

I am sure I haven't run the race I would re-do. My dream race is the NYC ING marathon. If I run it and then again, after death, I'd like famous musicians along the way (ex. Slash) playing my favorite music live, favorite athletes pacing me and the most perfect weather ever. After the race I'm whisked away in a blackhawk helicopter being flown by my favorite helicopter pilot for an ice bath, massage and then a huge after party with everyone I love. And Slash.

I never thought about the whole "dream musicians" on the course. Oh wow, that may be for another post. Take me down to the paradise city, where the grass is green and the course ain't shitty.

I'm pretty darn sure your most joyful event is down the road. Maybe the kind where the winners drape american flags around themselves at the finish.

Gold Coast marathon again. Or London even though I haven't run it (I'm entering the lottery as of 2014).
Actually I might just pinch Kathee's idea, just as it is!

London and Gold Coast (australia, right?) are quite a far ways away. I'm starting to see this whole blog post like a never fully realized episode of Lost.

OMG- I have so many races on my "to-do" list! Where would I begin?!?!? If I had a do-over, it would be Philly, but hopefully I will get that this November!

I have a very vivid imagination. Love that - course ain't shitty!!!