Mieville's "Railsea," HBO's "Girls", and Running Through My Neighborhood Holding A Flame

After watching the Olympic Opening Ceremonies, and wishing I was watching instead a repeat of Beijing's presentation, I can't help but be struck how hard it is to come up with a fresh new idea. And when an artist does come up with something worthy, usually it’s because they were standing on the shoulders of giants, as the saying goes.
Well, here are two Giants that seem to have sprouted from something original.
First is: The Railsea, by China Mieville.
The Railsea takes place in a land like none other. It's an adventure tail, of pirates and 'fisherman' and salvage-seekers, but rather than an ocean of saltwater, the sailors venture on trains over a world full of criss-crossing railroad tracks. The earth below is full of creatures, earthy and subterranean and exotic. It’s like radioactive waves struck a sandbox.  And like a Moby Dick obsessed Ahab, one captain tries to capture the beast of all beasts, while other characters are in search of their origins or to learn what is beyond the rails. 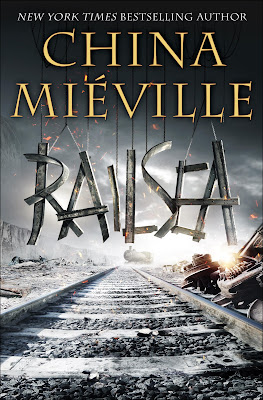 Fantasy novels have always been cursed in following the Tolkien formula. Of course, there’s different tones and worlds that can be created, but compare Terry Brooks to George Martin, and you'll find more similarities than differences.
But the Railsea, by China Mieville, is the most original land I can remember reading about. The king of self-described Weird Fiction, China Mieville, has weirded and welded something incredible. It makes me proud to be called a member of his same species.
The novel is described as “This is the story of a bloodstained boy…”Shamus Yes ap Soorap, and the first page opens to this poor fellow splattered with blood, and of course, the horror hits of how this young boy could become so bloody, yet the narrator asks us to withhold judgement. We learn the blood is from the first of his ‘modlywarpe’ hunts, and yes, it is a rite of passage for him, and the first of many rites of passages for this young apprentice.  A moldywarpe is a giant mole, and by the time you’re done reading this novel, you’ll have no doubt that the creatures exist.
Yes, an orphan as a main character is a bit trite, but the novel follows his adventures on the rails and his search to understand his origins. It goes beyond his parents to the nature of the world itself. Who created the rails? Were they maintained by Gods and Angels? When he sees an image of a single rail running across the land, it's evidence that this world is not all as it seems.
The novel is called Young Adult fiction but is YA only in comparison to the rest of China Mieville, and is full of weird and unusual styles. Some of my favorite moments are when the narrator takes a step back and self-reflects on the story and directly speaks to the reader, discussing story telling itself, and also gives periodic biological taxonomy of the creatures of the land, along with visual diagrams.
This novel wasn’t perfect for me (yes, there are some novels that are) but was so good that I reveled in its earthy details. Yes, earthy, as you will feel like you are burrowing in the earth along with the huge rodents and worms, and you can’t help but feel like you are also a sailor, yet not on a sea of water but a sea of rails.
I’m raising money and holding a lemonade stand in hopes that I can buy the movie rights, because I would love to see this on the big screen. In 3-d.
And then there's the Sunday night show on HBO called 'Girls' 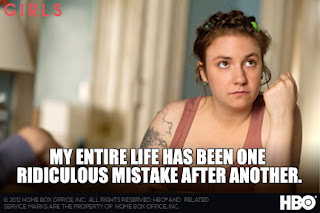 I am not supposed to be in this show's demographic. Middle-aged man who thinks he’s partying when he has coffee after 5 pm and really whooping it up, but I love this show.  You could say ‘sex in the city’ for a younger female crowd, but you’d be way off. It is ultra-realism, explicit but non-erotic, characters acting against their best interests and leading lives that are just tiny crumbs of their larger possible pies in the skies and not really fretting over it in the usual  ways but in quirky, self-absorbed hilarity.  The dialogue is so fresh and unique and always goes beyond your typical comedy-drama. The explicit nature of it doesn’t bother with typical sensuality but is more the 'boxers around the ankles' type of realism. If anything it’s more Seinfeld than sex in the city, and has an irreverent nature yet with very real implications.

Lena Dunham is both the creator and the main character, and she has an extraordinary brain, but has a regular, real body. She has hair that isn’t perfect, has angst from self-absorption that is comic and tragic. She says she's not only 'scared', but "I'm more scared than most people are when they say that they're scared. I'm like the most scared person alive." 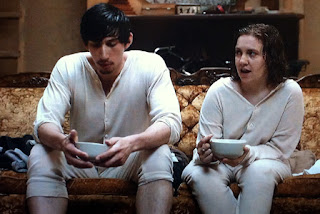 This is to her boyfriend, Adam, who disappears so much at first she imagines she has just invented him.

Yes, you need to meet Adam.  Only an original show like Girls can turn the odd Adam from his initial repugnance to something oddly heroic..

Just a couple of reviews on mass media. Now I'm off to run my neighborhood with a self-made Olympic torch in my hand, holding it high and proud and majestic and cruising through suburbia.  I would do something more unique and grand if I could, but all of us are still mimicking the Greeks, who gave us the bedstone of drama and tragedy and sport, and we're just following along, constant reincarnations of the same beings.  The only difference is, instead of falling to our death after running 26.2 miles over the land of Marathon and pronouncing "Nike!" (victory), we tweet and blog it.