Yes, I have been following the minimalist movement.  And by this, I don’t just mean running barefoot, but the theory behind returning to our roots, running like a child with perfect joy and form,  and trying to be a more primitive and less constantly plugged in as a high maintenance human.

Minimalist running to me evokes the whole concept of just putting on a pair of shoes and heading out, as au’natural as possible. Yes, I love that freedom, and that’s part of why I love 40 degree weather since I can do a ten miler with no water breaks, and that’s what is so freeing about a trail run where I typically don’t worry about mile measurements and run fully naked, well, fully sans-watch naked. In fact, I’ve done whole running seasons without a watch, and it was a nice relief. 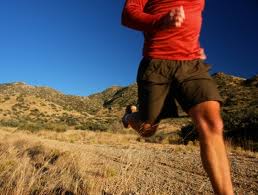 On the other hand I tend to be a ‘running maximalist.’ No, I don't run in motion control shoes, but I do love watching a motivational movie in front of the treadmill, I run with a carefully crafted ipod playlist, and I love running data if possible from my GPS and having a voice telling me my pace every half mile.  I  like to think that there is no tough weather, just soft people, but I wimped out on a 95 degree day recently and returned home to the treadmill where I  had some cold water next to me, and a lovely horror movie, Insidious playing in front of me. Twice last season I did a long run while watching the move ‘Warrior’ and both times it did some weird, wonderful things to me, head, heart, and sole. And there’s something nice about having a HD TV with a full DVR of shows and  Netflix streaming to choose from, a pile of S-caps, 32 flavors of  Gu, and glasses of water on a table next to me. And of course my own personal pot to poop in as needed just a few steps away.

That’s the maximalist in me. The minimalist in me read Born To run and loved it, mostly for the running stories and the Tarahumar Indians as much as the discussion on running technique. And yes, I have buy-in, have always felt I run the best with the lightest shoe. (Although I have spoken with a running store owner who remarked how many folks come in to buy one pair of vibrams, but never seem to come back for their second pair.)

During my recent Ann Arbor marathon, I saw at least two runners fully barefoot, and yes, every time we ran by a Home Depot, I heard thousands of beeps from all the stud finders inside going wild. 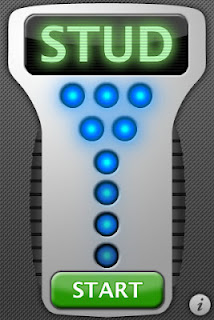 That said, after hearing the hype around the release of Brooks Pure Project,  I rushed out to a running store to try on a pair and I just didn’t feel it.

To me, when you put on a shoe, it doesn’t just have to feel good, it has to give you this “Ah ha!  Oh yeah Baby, Oh yeah!!!” feeling. I have to love the feel and want to go for a run the moment I take that first stride.  There is no waiting for a second date for me with shoes. It's not about wanting that shoe, its about needing that shoe, like none other will do.

In Harry Potter, the wand chooses the wizard, well, I want the shoes to choose the wearer.

So, I recently ducked into Running Fit sorta by accident, and just asked to try on some minimalist shoes, and when I put on the Saucony it melded my whole body together with a warm infusion. Like a shot of dope to my soul, I wanted them. And I was pretty sure I needed them.

I have been an Asics wearer, a Brooks wearer, a Nike wearer, but Saucony was my first running shoe in high school, and I ran my first two marathons in Saucony, and they seem to be less about hype and more about performance.  #findyourstrong (which I like) notwithstanding.

And Of course the Saucony Kirvana 3’s beg you to run fast. It reminded me of that feeling I got in high school when I trained in those old 80’s high heeled heavy trainers but then switched to a racing flat for the event. My fear is what will they be like after a ten miler and extra work on my lower legs.   That’s why the running fit salesperson said to start with wearing the shoes for just 10% of my miles (which, of course, means I’ll do 20%) to work into it. 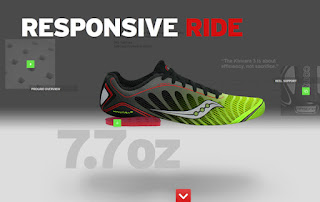 I love running store sales staff, especially at stores such as running fit.  Unlike car salesman, who often have me feeling gross and with the urge to run home and shower,  running store folks seem to embody the product they are selling.  This staff person was an ultra marathoner, trail runner, and it was clear talking about running was as natural as breathing. And she was all inked up, which, if you’re a trail-running ultra-marathoner and inked up, you probably kick ass all over the place.

Then I noticed tattooed on her underarm parts of a Robert Frost poem:

If you’ve read a few of my posts, you’ve seen me quote these last lines as well. Yes, it had to be a sign, so the purchase happened and now the shoes have a new home.   I certainly hope my future  (injured) self doesn’t’ curse my current self for making such a change, but, first, I have 10 to 20% of miles this week to try them out.

So, I took them out for a ride.  It was hot as hell, of course, so I went to the track where it's easier to take water breaks.  Like a middle-aged crisis man with a new sports car, I had to take them out fast a bit, and after a few warm up miles, did  miles at 7:15 and 2 others at 730, but all of my miles were under 8 minutes,(8 minute miles has been my base for a good-clip medium run).

Yes, the shoes beg to be run fast in, and miles slip by much quicker.  And I swear I could feel the pavement. No they aren’t vibrams, they do have a 4 mm drop, but I left the imprints of all my toes on the hot, soft track.  I tried to focus on form, a /fore-foot strike, since its so easy to fall back on my heels when I get a little tired. The shoes not only worked for me but gave me a whole new excitment, and I wanted to share with everyone I talked to that day about my new shoes, but, alas, my filter was working, and I held back and resisted boring the hell out of everyone with a running story.

Of course, I figured they’d feel this good, the real question is will my legs recover as well from having less cushion for the pounding. We’ll see. If not, I can always put the sports car in the garage and only take it out from time to time, but ideally, I’d like my legs and my gait to adapt, and get me a new pair of these every 350 miles or so.

I can’t wait to wear them and bust out with a full set of intervals, can’t wait to see how they’ll work once I take them on a full 20 miler, but I  just wonder if the minimalist shoes will work on a treadmill, in air conditioning, watching a blu-ray of The Hunger Games, (haven’t seen it yet) or a couple episodes of Game of Thrones.  (Yes, it's hard to tell but Winter is coming.)

haha...some great parallels here! now, don't hate me but i'm not the biggest fan of the entire barefoot/mini craze, but mostly because of people who dive in and aren't informed...sort of just for pulling the follow the leader/hype. but hey, if u're got the right foot for minimalist shoes and are smartly training...by all means! :)

Great post Mark, really enjoyed it. I used the Kinvara 2's and went from love to hate back to love, and am now looking forward to trying the 3's. I think they represent a wiser middle-ground (still some cushioning, but lower heel-to-toe drop and lighter weight) for most runners versus the mad rush to full-out minimalist.