"That's Not A Feeling" by Dan Josefson - Book Review:

So, this is my first book review as a "Great Minds Think Aloud" reviewer.  It's a little verbose, and I may have gone a little overboard, but I am going to chalk it up to 25% excitement and 75% to the very complex novel that landed at my doorstep. 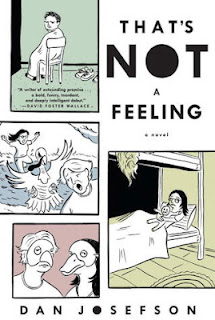 That’s Not A Feeling, by Dan Josefson, is the story of Roaring Orchards, a boarding school for troubled youth, and traces the experiences of Max, a new student who encounters this strange world following two failed suicide attempts. After smashing out his parents windshield in the facilities parking lot, and believing he was ‘just on a tour,’ Max’s parents leave him without a goodbye in the hands of staff who adhere to the school’s philosophy that few can explain or understand.  The journey of Max, along with other students, including one particularly endearing and quirky girl named tidbit, is told in mixed narrative.  Max is admitted as Aubrey, the school ‘headmaster’ and creator of this world, is sick and may be dying.

The title, That’s Not A Feeling,  comes from the list of accepted feelings a student, and a staff member, is allowed to identify when being challenged and confronted, and it just one of the many ways forced and feigned ways of being are put upon the cast of memorable and distinct characters.

I received an Advanced Review copy of the novel for my role as a Great Minds Think Aloud reviewer, and my interest came partially from my short-lived experience as a social worker/counselor in similar facilities where they use what is called Positive Peer Culture, and yes, it is certainly its own culture. In Roaring Orchards, groups have to physically gang up on others who act out, students have to face walls, have their shoes taken away, and there is a whole esoteric dictionary of words, terms, and acronyms.

Children and staff alike in Roaring Orchards struggle with how much ‘buy-in’ to have for the schools curriculum. Students can explain the reasoning behind the therapeutic interventions, but it is certainly not something they have faith in, and ultimately they feign issues so that they can then impress their therapists and show progress. Staff spends time mocking the children and seem to be as adolescent as those they serve, some pledging allegiance to the mission but others planning to sue the facility or finally tell the administrator off and demand it close.  Just as the children plot to run, staff think of leaving, turning over “states-evidence,” while those with idealistic visions are met with a steel shovel to the shins and a rude awaking. Parents who object to the punishments tone down their words when offered the chance to bring their child home, since then the rules don’t seem so bad. The ultimate existential crisis for the Max, and the rest of the youth, is to run, or not to run, and youth are often chased sprinting from the grounds of the school. The only true relationships in the novel are those that are undercover, with children bonding through secrets, shared rule-breaking, and secret plots to leave.

Genuine longings and hopes go unfulfilled, and it seems the author and the reader want more for these characters. The world the author has created is all game playing with various interventions that make it comically but darkly absurd. When you FIB you are using functioning intimacy blockers.  Students get ghosted and nobody can speak with them since they aren’t really there. They are put in their rooms until they remember things correctly, made to sit facing corners, split up into oddly named groups, and in an incredible birthing scene gone wrong (that just may have stolen the show) students recreate their own struggles in the womb, emerge to an idealistic mother, and ‘relearn’ how to form bonds.

The author doesn’t seem to be making a statement on a boarding school, what seems to fit more is that this is just a microcosm of the world we all live in.  True relationships and connections that are ached for are not found in easy, outwardly ways, feelings are feigned to get along, masks are created with beaks to appease others. Sure, we can run, but where to? We may be incapable of surviving without these rules, and we want to stick around, just to see what kind of drama happens next.  The author loved all of his characters, none of them are evil, their intentions and longings are very human and even grand at times, and the dialogue between them flowed wonderfully. Ironic passages where characters are constantly feigning how they are supposed to feel, unwittingly mocking the rules, all of them aware of the absurdity, and once in while rebelling with an axe or a fire.

The oft-occurring childhood violence is not searing, nor are the actions necessarily evil, they are matter of fact, done on a whim, with little spite and seem to be the only way a student can have any true impact on the environment.  When they come, they often make sense, or at least aren’t some sort of reflection of a dark human nature, and there’s just enough empathy for the children and supposed theoretical principle to the school to make it seem legit, and just enough mastery by the God of his Universe, Aubrey, to keep it going.

Aubrey, like any charismatic leader, has tremendous personal power and abilities to persuade others. He asks questions, spins truths, and interrogates others in a way that undress any last bit of defenses. Yet this God is dying, maybe losing his sanity, because when he finally lets it all explode in a bit of a mea culpa; telling the children and staff what he really thinks of them, it’s barely noticed. Their leader is lost, utterly disappointed in his failing and the flaws of those around him, but .everyone moves on without notice.  This is chilling. Aubrey was maybe the best part of the novel and sprinkled about in just enough doses that you wanted more.

What made my jaw drop was actually not what was inside the novel, but when I saw that David Foster Wallace, author of Infinite Jest, has a blurb on the cover.

"Dan Josefson is a writer of astounding promise and That's Not a Feeling is a bold, funny, mordant, and deeply intelligent debut." --David Foster Wallace, author of Infinite Jest


Nuff said, right? Why is anybody else even bothering doing a review?  This is Warren Buffet admiring your stock picks, and Martha Stewart oohing and awwing at your decorative dishware. Wallace is the modern day face of so called “difficult fiction,” fiction you have to work at as a reader.  It was the last book blurb Wallace wrote, reportedly doing multiple rewrites to make the 22 words give the right emotional impact, and That’s Not A Feeling was perhaps the last novel he ever read, before taking his own life in September, 2008.

This novel did take a bit of work, and my guess is there will be a splatter of one and two stars or “I gave it a chance, but I just couldn’t finish it” where others will applaud the efforts and speak of its subtle hypnotizing nature. I was both of these during different moments, but I’m a marathoner, and I know that the first miles can be the toughest and once you get warmed up, it flows smooth and sweet.  The novel is published by Soho Press, who pride themselves in presenting works that other houses ignore since they are not so quickly and easily digestible by the public. There’s something noble in that.

The difficult parts were the inexplicable narration change. The novel begins in third person, but then switches to first person, and the reader wonders how the narrator knows  things where he isn’t even present, and how he can describe how other people felt as if he’s omniscient, . You learn later that it’s a retrospective, and at one point the narrator self- reflects about writing the actual book you are reading.

“Mr. David Wallace,” if I could only ask, “were you referring to this unusual narrative stance in your praise?”   Because what I kept feeling was that the author was cheating, using the immediacy and intimacy of a first person narrative, yet also the more universal storytelling tools of the third person narrative.  Despite the intrusive narrative changes, however, it was a world I don’t’ want to run from, but certainly wanted and needed to stick around, just to see how it may end. In fact, after finishing the novel, I didn’t’ want to read anything else for a bit. It felt like having a unique dish, a rarely tasted flavor in my mouth, and I didn’t’ want any new flavor to spoil it.

It seems kind of cheap to use traditional ratings to grade a non-traditional novel; to buy-in to this 5 star system for a novel that mocks superficial buy-in, but like a Roaring Orchards child I’ll play along, rather than run, and give it  4 stars, and will wait for the many future novels to see if indeed George Foster Wallace’s spirit has lived on in the body of Dan Josefson.

That’s Not A Feeling is scheduled to be released on October 2, 2012, by Soho Press.

Get the novel here on Amazon  or  click here for Goodreads.

hmmm, pretty interesting concept for a book and thanks for the review on that one! sounds like if it can make u resist wanting to even crack open another book for a bit it's worth looking into....i mean c'mon u'd even pass up the J. Beiber biography?? ;) jk...on a serious note u do really great and thorough book reviews, i kno the authors really appreciate that when there have been some reviews i've read where it's really 'phoned in'...lol.