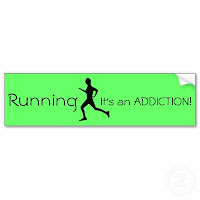 Every wonder what really makes someone an Addict? I mean, in a professional's opinion
Addiction, of course, goes beyond the “it's something I really like to do,”  “I can’t stop doing it,”  “I do it so much that other people think I’m crazy,” or, “I think about doing it, dream about doing it, then I wake up and realize that I am actually doing it.”.    Actually, my favorite is, "if it's the first thing you reach for in the morning when you wake up, then you may be addicted."
Addiction is a word thrown around pretty loosely and casually, but there is actually a criteria for a diagnosis, decided upon by a big alphabet soup of PH.D's and MA’s and LLP’s.  If you have ever seen that big maroon/purpley/redish color giant volume on someone desks called the DSM, or Diagnostic and Statistical Manual of Mental Disorders, that's where you will find it.  Yes, there are zillions of diagnoses, and probably more than a few where we could all fit into. When folks say things like “I am clinically depressed” what they mean is they fit the clinical criteria as described in the DSM, which is constantly being revised like the menu at Denny's. 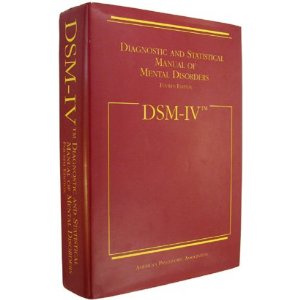 This manual is currently being redesigned again, and for the first time the smart psycho mumbo-jumbo folks might introduce a catch-all category — “behavioral addiction — not otherwise specified” — that some  experts think would be too readily used by doctors to diagnose addictions to a whole plethora of things, including, yes, Running.

So, are we ‘clinically addicted to running’?

Let's look at how someone gets diagnosed an alcoholic, or Alcohol Dependent, as the DSM says, and see if there’s a running equivalent.  There are 7 criteria listed below, three or more of which have have to simultaneously occur anytime in the same 12 month period for you to call yourself a member of the Alcoholic club. And as Groucho Marx said, I wouldn't trust any group that would have me for one of their members.
1. Tolerance – this is the alcoholic who used to barf after a pint of Vodka, that now drinks it for breakfast like it's nothing, and eventually needs to drink much more for the same effect. They can drink incredible amounts and become "ultra-drinkers." where before they could just drink a 5k worth of dixie cup shots.
The Running Equivalent: You used to get excited when you ran 3 miles, now you need to run 10 miles to get the same high, and 3 just doesn’t do it anymore.  I suppose we could just call this endurance, right?
2. Withdrawal – when the alcohol is not in your body, your body revolts. Every cell begs for it, shakes and quivers and sweats, and it makes the regular flu look so tolerable. Ultimately, you take the substance to relieve these symptoms.
The Running Equivalent: when your body doesn’t have the endorphins flowing you get cranky, moody, depressed, your body craves the substance to relieve this pain and your brain starts working overtime trying to figure out how to fit in a run, maybe in the middle of the night when nobody will notice - just a little one will get me through, a little bit can't hurt.  (note: this is the plight of the injured, and you may start trying all sorts of bizarre alternative aerobic options) 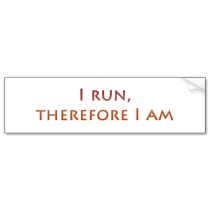 3. Alcohol is taken in larger amounts or over a longer period than was intended.  This is the drinker who tells themselves 'just 3 beers tonight' but drinks 30.  They stop off for a beer after work but end up closing the bar. They go to the liquor store for a half-pint only but then do the half-pint shuffle back and forth for another and another.
The Running Equivalent: You head out on a run, tell yourself you only have time for 5 miles, but then you feel better than you thought, keep going, say just one more, just one more. Or you sign up for a race, promising you won’t do another this season, but then you get a free entry, you see the t-shirt and it looks really cool, all your friends are doing it and it's only a half-marathon,  plus you never been to such and such place so why not…

4. A desire or unsuccessful efforts to cut down or control alcohol use. This is the alcoholic who swears it off repeatedly, I will stop! usually announcing "I will never drink again!" quite ceremoniously. Then they go back to the substance and swear,  "I will drink less, I will drink only beer, I will drink only after work, I will drink only after noon, I will never have those six shots of Jack after a 12 pack."
The Running Equivalent:  You tell yourself it's time to stop training so hard, time to just run for enjoyment, I don't' need to run every day, but after a few good runs you realize, "Hey, I'm rested up and ready for some age-group awards, a new PR, maybe a new distance..." and your promise to reduce your running obsession, that you previously knew was harming your qualify of life, turns to instead some new passion to run farther and faster.  We can't have just a little bit, can we? Once you've had the taste, you can either abstain, or go all out.  There is no moderation. Nothing Exceeds like Excess!
5. A great deal of time is spent in activities necessary to obtain alcohol, use alcohol or recover from its effects. You start drinking way before the party, you hate when the bar is closed during dinner at weddings, you buy a new pitcher of beer when your current one is halfway empty, and you have multiple hangovers that last all day rather than just the occasional January 1st flu symptoms. You have a special hangover routine you follow, and you do it quite often.
The Running Equivalent: you spend time thinking about it, planning it, it becomes the sun of your solar system, the apple in your eye, the meat of your potatoes.  And where before you used to have to just ice yourself once a week, now you are sticking a pack of frozen peas on your legs every day from running so hard.  Your physical therapist says "The usual?' when you walk in, your sports doctor starts booking vacations based on your copays, and the family gets used to waving goodbye to you as you run off. 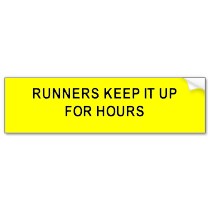 6. Important social, occupational, or recreational activities are given up or reduced because of alcohol use. Almost all of your events start to revolve around alcohol.  You won't go to a restaurant unless they serve drinks. You used to play softball, used to go to movies, played flag football, spent time with your kids, but all of that starts to fade. You have about sixteen words with friends games going but just can't get to any of them anymore.
The Running Equivalent: You used to go to work and then run after work. Now you skip out early and take long lunches to do a RUNch.  You used to also bowl, knit, read, watch movies, breath, but now you spend your time running, reading running blogs, thinking of your last running route, folding your race event t-shirts, looking over your training log, reading every review on marathonguide.com. The softball team or book club wonders where you went.  You're off running, of course, cause who has time for softball, reading, your kid's wedding, or your marriage anymore.
7. Alcohol use is continued despite knowledge of having a persistent or recurrent physical or psychological problem that is likely to have been caused or exacerbated by the alcohol.
.This is the alcoholic who drinks, loses his temper and explodes at his wife and his kids, cusses at the toaster, gets a few DWI’s, starts bleeding from his ulcer, misses work, gets more depressed, has the shakes, thinks about killing themselves, the whole sad laundry list, all with knowledge that this has come from drinking,  yet they continue to drink, often times, actually increasing their drinking as the walls start to come crashing in around them. The guilt builds and so does the rationalizing that maybe it wasn't the alcohol starts to follow. Your brain develops all sorts of twisted thought patterns, self-deceit, and after years and years of this you turn into a major sick and suffering addict.
The Running Equivalent: This is perhaps the biggest one and single biggest predictor. You continue to run 50 miles a week even after it injures you. When you get a running injury you still run and make it worse. You continue to run the same schedule even though your family is begging for more time with you.  You're losing sleep, missing work, thinking about running too much to focus, yet you still let your training plan remain the same.  This is the area where running seriously detracts from your life, part of your brain can't help but notice, but the other part needs to rationalize and say "hey, I'm just hard core," or "I'll stop once I qualify for Bostons, break a 3 hour marathon, run that next turkey trot backwards, or  fill in the blank."
So, be careful, pretty soon you may find yourself with a brand new diagnosis, starting next year when the new DSM comes out, and you can say I have a "behavioral addiction - not otherwise specified" and everyone will go AWWWW, wow!  That's cool, how do I get one of those?
If you don't want that diagnosis, read this follow up post on  William Glassers "positive addiction" theory.
And by the way, you can always just tape the ice pack of peas to your knees, that's what I've started to do.
STRAY,  Now Just $2.99 on Amazon
Eleven Reviews of STRAY

I definitely admit that running is a bit of an addiction for me. I have an addictive personality. But I think it is a healthy addiction and I keep it in check. I think if a runner got to the point that #4, #6 or #7 on the list above were true, then that would be a serious red flag. Great post!

Thanks. Obviously the analogies don't all fit, and yes, I agree, like you I think running is like William Glasser's version of a positive addiction, but not automatically. More to come.

Excellent article! The parallels are surprising.

this topic is something that comes up a lot as people always tell me i'm addicted to running, i've been thru a lot of the same train of thoughts u've listed and in the end decided, "he##, if i am, there are far worse things so if running is the one so be it!" i've got a really addictive personality and am pretty sure that if i weren't getting my 'fix' from running my future wouldn't be so rosy...power to craving those endorphins via sweat! ;) great post!

Hey, thanks for writing and asking and it's a great question. I just added a follower gadget to the left sidebar, and I hope that allows for an easy follow.

Thank you! I found it and am following. Sorry about the deletion above...am on my phone and it is less than ideal. Always enjoy your comments and posts.