22 Miles On A Record-Breaking Memorial Day


The last long run of a marathon training program is a climactic event. In some ways, more so than the actual marathon, which is sort of a victory lap.  I always approach them trying to mimic race day; eating the same, wearing the same things, running at the same time, twisting my thoughts in the same exact bent.

Ideally I look for a sponsored training run, and Running Fit was having one Saturday in Ann Arbor.  Unfortunately, my family was taking a weekend trip so couldn’t attend, so instead chose a solo run on Monday morning,

Since I like to run this last long run on semi-rested legs, my challenge was taking a three day trip without running.  This wasn’t easy, as Grand Haven had wonderful running routes along a lake front boardwalk and tons of trails.  I feel like I experience any new area best through the eyes of, and on the adventure of, a nice morning run. As it was, I stayed inside with the kids while my wife went for her workout along the lakeside. The only movements I did was lots of walking and chasing Frisbees. Lake Michigan was frigid so I imagined the water icing my still sore knees while we waded in the waves. My shoes remained at home, also resting in my closet.

The next challenge was mapping a route around my hometown’s very popular and quite large memorial day parade. It cut me off from my main running routes along 8 mile, so I spent a good chunk of time on Mapmyrun, and found a route that connected two gas stations (where I go to buy water and other needed supplies, and then hide them in shaded areas.) The route included the much needed hills to prepare me, and a way to run around the parade and return home.

The weather was 70 degrees at the start, but soon lifted up to 85 for much of the run, on its way to a Detroit Memorial Day-record breaking heat of  95 degrees. All under a perfectly (monstrously) blue sky.  After all the comments on posts I had written across the blogosphere on not canceling races due to heat, and threatening to still run these races using water from the sewer to hydrate and the bile of passerby’s for Gu, I certainly couldn’t let the heat dissuade me.

My legs were eager, and I started off way faster than I should have, and my whole plan to make this a progressively faster run was shot. Instead it was a sporadically faster run, with four 7:50’s and a couple of 8 minute miles mixed in with the rest averaging 8:20.

I took more breaks than usual at my self-made aid stations to pour water over my neck or swallow some s-caps in the shade.  Same way, I assume, that if (when) it’s 80 plus degrees during the marathon I will walk through aid stations to make sure to grab more than one cup of water.  I swear with every s-cap I took, I immediately tasted the salt streaming down my face into my mouth.

Oh, the strange skills we use.  In order to space out the water, I grabbed a a smaller water at the gas station and carried it for a a couple miles to hide it in the middle of my route.  I stashed it amongst some trees, but realized, like a pot of gold, I may never be able to find where I buried it, so I broke off some branches, and laid them on the other side of the sidewalk pointing to the life-saving water for a later miles.  A water cairn.

And while I am sure the heat effected my time, I sort of enjoyed it.  Anything that makes my head a bit more hazy, makes me more prone to running hallucinations, and increases the running stud factor is all good.

Never try anything new on marathon day, is a familiar adage, but for this long run I did. I hardly ever use Sunscreen, but since my noggin was roaring red from the weekend at the beach, I applied a high-grade Walgreen 30 SPF to my head and nose.  Well, as the sweat poured out my body, the blinding cream poured into my eye, and in my attempt to wipe it away, the leftover Vaseline on my hand I had used for body lube to stop from chaffing was added to the mix. The result was a blinding venom, and  I did at least 3 miles with one eye closed and cleansing tears filling my eye. 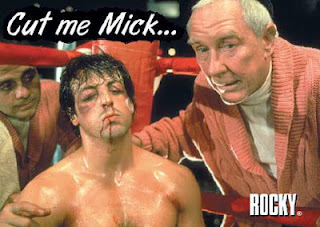 But it was the aching legs that were the real challenge.   They already felt sore at mile 14, where in previous trainings this doesn’t happen, and I know it’s a function of my low weeky mileage.  This whole Ann Arbor marathon thing was just supposed to be a warm up to train for New York, and I’ll need to remind myself of that more than once I’m sure.

The greatness of a last long run allows me to change my self-talk a bit.  “After this, your training stops, it's all over, just this one left...” I could yell at my legs.   I told them the usual lies, like ‘we’ll take a whole week off after today” which of course isn't true.  “There is no tomorrow” I also screamed at them in my brain, not a full lie but maybe a half-truth.   I did what I could to summon everything out of me to get to that place where my greatest running passion springs forth.

And yes, there’s nothing like what gets pulled out of you during a long run, and that feeling when you finally arrive home, 3 Gu’s, 6 S-caps, and 22 miles later.  Another thing I took note of is, (as narcissistic as this could sound) I am always anxious to look at myself in the mirror after a long run. I want to see the slime on my face, the look in my eye, the beating blood-red head, all to see the metamorphosis of what the experience has done to me, since every time I accomplish these things I feel like a new beast.  It’s like the run is a full moon, and sucks the werewolf right out of me.

And, the beast I had turned myself into felt deliciously exhausted and hungry, and began to devour things. Here's what I ate the rest of the day:

Ah, taper time. Time to eat, get fat, rest, and have my mentally deranged, tapering mind fight to roll back every mile I ran and tell myself I'm under-trained, I'll never finish, what the hell was I thinking, and of course, imagine all sorts of phantom injuries.

Congrats on the 22 miler!! I love finishing that last long run. :) Great job and enjoy the taper. I hope you don't go TOO crazy. :)

GREAT JOB!! dang, u have to always love finishing and then the entitlement to gorge out after runs like those. ;) now bring on the taper! just don't fall victim to IVT..insanity via taper...as Supermom wrote above the mental part of tapering can be tough. i go cray-cray...but it's worth it to have kick butt legs come race day. awesome job out there especially with that heat!!

Good work. I could barely knock out less than 1/3 of that distance in the heat Monday.

I think this somewhat answers my questions on what races you have coming up....I'm curious. I need to get reading here and get caught up!

What are the S-Caps? Are these sodium supplements? I'm thinking I need something for my long races to mitigate cramps. You know how unnnecessary painful my marathon was, so do you think something like this could factor in? I don't think Gu alone works for me.