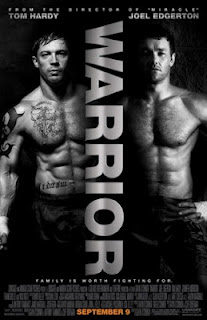 What a perfect Long Run movie and what a great experience. I am still buzzing 24 hours later.
Yesterday, I got on a treadmill for a 17 mile run and popped in the movie “Warrior” figuring it would be an inspiring movie to keep me going. This movie rocked my run and gave me my greatest Long Run this season.  I picked up my pace and ran many of the miles  much faster than I thought I was capable.  My 8:15 miles turned into 7:30’s, and the whole thing had an incredibly cathartic experience to it. I can’t tell if I was just my ‘runner’s high drunken state’ or not, but I think the movie made its way into one of my favorites of all time.
If you haven’t heard of it, "Warrior" is about a mixed martial arts tournament, and traces the path of two estranged brothers, both sons of an alcoholic. Both brothers have different yet inspiring reasons to fight. And the ‘nearly 1,000 days sober’ father, played by Nick Nolte, perhaps gets beaten the most as he tries to win back both their forgiveness. Yes, it has cliche and stereotypical training montages, is contrived at times, but it is done so well they are dismissed, forgiven, and beyond that even welcomed since you can appreciate them.
The pace of the movie lended itself perfect for a long run. It’s an engaging start that lets you dissociate, some exciting moments enough to keep you awake and keep your heart pounding, and as the characters are introduced you immediately want to know more about them and their back story. The second half just gains momentum and blasts off, like a good progressively faster long run.
Unlike most any fight movie you have ever seen, you are undecided as to who you want to win the final match.
There is the refined, family-rearing, high school teaching, training to Beethoven, “could guest-star for the glee teacher,” noble father of two young girls trying to keep his house.
And then there’s the chip on his shoulder, savage, tough as nails, no-nonsense, I’m the biggest bad-ass even though I’m fragile and dismissive of any compliment so don’t’ try to get close to me, high school wrestling champion.
The memorable moments were many.  My tears mixed in with my sweat so many times during the movie. When Nick Nolte stood on the street looking at his grand kids through the front screen door, when the brothers won a fight you knew they would win but it was suspenseful anyways, and with each triumph I screamed from the basement fortunate that nobody else was home. Testosterone laden men who are also fragile, fractured, hurt, yet striving for something bigger than themselves - "Warrior" is from Mars the way Terms of Endearment is from Venus. 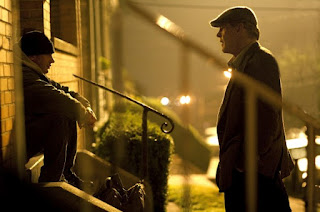 Yes, watching the training scenes was extra motivation to run, and my pace naturally picked up noticeably during the fight scenes, but it was the relationship battles that made the movie so great. You ached for forgiveness to be spread quickly among the family, but it never happened when you expected it, it was just dangled sweetly in front of you to the point you wanted to scream at the characters on the screen.  And if a movie can make you do that, even if you are totally wasted and high after running 17 miles, then it has done its job.
You ever notice during movies when you watch someone training for a fighting event, that the running scenes are of the most inspirational?  For example, if you want to do Rocky, what do you do?  You run through the streets early in the morning, bound up some stairs, and then dance around with your hands raised in the air. In “Warrior”, the training scenes focused on runs; in one  brother’s case morning runs through the city streets, and in the other, bounding up hills in the countryside, at first back in the pack and then in the lead. Nothing represents training, physical freedom and physical prowess such as running.
I didn’t see all the 2011 best movie Oscar nominees, but I’ve invited the cast of "Warrior" over my house and I am giving them a trophy and demanding a speech, because this was my Best Film of 2011. And despite what you may have heard about the violence, I found it fairly mild compared to what had been described, not at all disgusting, and actually less violent than the real thing.  Forceful, visceral, and blunt, but not gratuitous.
So, if I can just run with some sort of visor to this movie, I’m all set. Until then, if you are stuck on the dreadmill for whatever reason, especially for 2 hours and 20 minutes, put this movie in and get ready to rock.

I love "guy" movies so I am going to have to watch this one when I am back stuck on the treadmill this winter for my long runs. :)

This movie sounds like a possibility for my list of movies to watch. I like movies that are the male "equivalent" to chick flicks. I used to walk on my treadmill every day while I watched When Harry Met Sally for 90 minutes. I memorized that movie because of it, but it was helpful to get my 90 minutes in.