Are You A Vampire Or A Zombie?

Are you A Vampire Or A Zombie?
Running the last 6.2 of a marathon, to me, is such an incredible space to exist in.  Every race it will bring something fresh and new, all of them varied, all of them powerful, and all of them life-changing.
My first marathon I was so scared of not finishing that I slogged nice and slowly and evenly the first half.  Suddenly, I was at mile 15 or 16 and felt so fresh and ready to rock.  I started to speed up while others were slowing.  With each step I seemed to gain energy, and with each new runner that I reeled in and passed, I sucked the life force right out of them. Like some sort of running metaphysical vampire, I fed off of their presence and shot right on by.  The momentum and energy gained by passing others during the last part of a marathon was incredible.
Likewise, I have been the zombie at the end, moaning with each stiff-legged step, dragging my limbs in burdensome effort, and had my life force sucked out of me by other metaphysical vampire runners who swooped by me.  Each runner drained my soul of its life force, bludgeoning my spirit down and shredding my legs. I watched in agony as they passed me by as if they didn’t even run the first half but were dropped off there by helicopter.  It seemed supernatural. 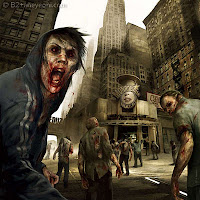 It’s much more fun to be a life-force sucking vampire at the end, rather than a slogging, leg-damaged zombie doing the walking dead shuffle.
﻿
﻿

Maybe that part’s obvious, that it’s fun to run by others, but running negative or even splits has also been shown to be the most effective way to run your fastest marathon. I’m certainly a believer both for time sake and for race day enjoyment.  The danger is that you will save too much for the end, which of course rarely happens, and run a slower time than you would have for sake of running a faster second half.
It is easy to get pumped up by the excitement of marathon morning and go too quick out of the gate. After standing in the cold, waiting for an hour maybe, your heart swells with fervor at the national anthem, and the energy of 40,000 or so training programs all gathered in one spot around you swirl like a spiritual tornado ready to lift everyone off the ground. Plus you have just finished  a long, 3 week taper where your legs have been begging to be set free, and all of this makes for a strange and mysterious rocket fuel to propel you too fast at the start.  It’s one of those things you have to do a few times before you will realize its danger and futility.
There are a variety of sayings I tell myself to hold myself back.
“There’s plenty of time to run faster later - plenty of time to run faster later.”  I will tell myself, or “run your own race -- run your won race” and of course, “the race is long, and in the end, it is only against yourself” or some such Yoda-like nonsense that sounds better in the heat and sweat of the moment.
A phrase worth repeating: run the first ten with your head, second ten with your legs, last 6.2 with your heart.  Conserve energy, and then gradually tap into it, running the last 6.2 in your desperation zone leaving nothing.   If  you have already covered a similar distance in training runs, you can run the first miles and be surprised at how fresh you will feel.  At these moments,  “There is no Tomorrow,” is my self –talk, or I sing me some Cat Stevens to dismiss the pain; “Lord my body, has been a good friend, but I won’t need it, when I reach the end…”

When trying to get a PR, qualify for Boston, or run any certain never before achieved time, it’s easy to go crazy with all sorts of mathematical equations in your head, trying to figure out what you need to average for each mile or what to hit with each split, and next thing you know you are caught up in the mythical “put time in the bank” bullsh*t. I have spent many moments back when I was young and foolish (like last week, for instance) writing down all sorts of magical mile combinations of how I could somehow trick the marathon and force a Boston qualifier by running 7 minute miles the first half and then using that ‘banked’ time to run an easy 8 minute average pace second half.   It’s a rite of passage the young and dumb need to go through and fall on their face a few times.  You don’t bank time, you bank energy, and unleash it at the end slowly, putting down the peddle and emptying the tank, squeezing harder and harder like your body’s a roll of toothpaste and the trick is to save the very last drop for the last moments, but not too much too soon.
If not running an even-paced run, I have found what’s worked best, is actually starting slower than target marathon pace, and then speeding up. A progressive run where you run faster as you get warmed up.
The easiest miles to run the fastest, I find, are miles 7 to 15, since these are the times my legs are most warm, loose, and full of energy and strength.  For this reason, I try to start the marathon at a pace 5 to 10 seconds slower than marathon pace and then speed up to marathon pace by mile six or so.  Then I run some middle miles under marathon pace where it all seems so much easier, all in the hopes of dropping me off to run the last 6 to 8 miles by reeling people in and feeding off that energy.
I think I”ve heard this described as an “even perceived effort run”, but if you do this, and are keeping an even pace at the end, others will be slowing, and with each runner passed you will be propelled into a glorious finish.
Here’s an example of what I mean for a 3:20 marathon
1 to 5 at  7:45
6 to 10 at 7:38
11-15 at 7:33
16 to 20 at 7:35
20-26.2 between 7:40 and 7:45
So yes, be a Vampire, not a zombie, suck the blood from other runners, rather than shuffle to the end.  Vampires are suave, cool, sophisticated. Usually sexy and well dressed and hard to resist their attraction, and they certainly have endurance as they exist into eternity barring some chest through the heart or other misfortune.  Zombies, on the other hand, shuffle with decaying limbs, have blood stains on their faces, and get slower over time.  If not being shot in the head for safety, it is done for mercy. 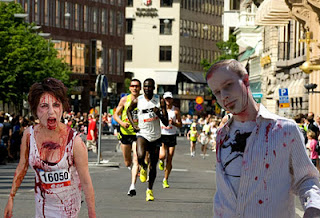