Hills Are Barriers Dropped On Earth From God

The movie "The Hills Have Eyes" was scary, and then they made a wicked remake that was actually even better.  The Hills Are Alive With The Sound Of Music is a song lyric that can't help but make you smile and twirl in Joy. Such is the plight of runners, Hills can terrify or make you sing.  I guess it's just perspective and experience.

Hills are barriers God dropped on the earth to see if we really want something. Mountains are put there to make sure we earn it.  If the world were flat, everyone could roll a marble forever and do other miracles.  The reason Gurus are on mountain tops, is because the answer we seek is found during the struggle to get there. Try going helicopter to one instead of climbing, you will come home empty.  The yellow brick road has to have flying scary monkeys and other child-terrifying things else it wouldn’t force the answers out of you.
(Yes, I'm waxing the candle poetic and burning on both ends.)

All this to say  I ran my first hill workout this week in a long long while. Doesn’t mean I didn’t run hills in a long while, it was just my first one dedicated to hills. Every time I reached the top of an incline, tiny little invisible guru's popped into my soul by Osmosis.  I returned home a wiser man.
During my quest to finally qualify for , I had a track coach suggest I do leg weights.  It’s the strength at the end I needed to carry me through as much as anything.  Not heavy, bulk building weights, but simply greater muscle fortitude. I took every bit of advice I could get, and did some leg weights.  The problem was it seemed to test my ligaments and joints a bit too much, and it seemed to get in the way of my training schedule.
As most of you obsessed runners, I wanted to gather all the info and try all the tests I could find and do anything that would work.  Once I stood on my head and whistled yankee doodle dandee, only because I had a vision one night that it would lead to a more effective running stride. I finally stopped when my face turned so red my eyes started to bleed.
The results of standing on my head in preparation for the marathon were inconclusive.
But, the results after doing hills were clearly incredible.  Stronger legs from the Hill resistance proved to be the best weights nature could provide, and the differences were clear.  I started with a 4 mile loop with some nice, varying hills. Some long, ½ mile inclines, a couple steeper ¼ miles, and with a bit of rest to recuperate.  The problem I had with hills, as well as speedwork, is that it wrenched my legs so much that it ruined the runs for the rest of the week. They have to be sprinkled in effectively for a 40+ year old like me.
I threw this loop into part of some longs runs as well.
I’m a believer, and thus I’m starting to throw in some hill runs in anticipation for a spring marathon.  That along with some speed work and bumping my longest runs up slowly from their current max at eleven miles.
I hope to run 12 on Thanksgiving, and then impress the in-laws by out-eating everyone at the table. 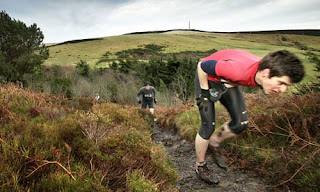 The Myth of Hills At .


This training was done both to qualify for Boston, which was done at a fairly flat course, as well as  preparation for Boston.   As a first time runner, I researched all the nuances of the historic Boston course.  What I found was that the much heralded varying neighborhoods along the course as you ran to the city lived up to its hype.  There are distinct and fun areas to run through.  And seeing the Citgo sign in the distance was as spiritual as any gas station marketing can have upon a person.


However, after hearing about the hills, what I found was there are no hills.  The course IS hills.  When I hear Hill  I hear a flatland approaching a hill and then getting flat again.  The whole course is always on an incline or decline, which is what suprised me despite seeing the elevation chart many times.  And the neat thing is you can thus see forever in front of you, and the whole mass of runners makes you feel that much more a part of the community.


But, none of the hills is that daunting in terms of its steepness, but a few are strategically placed by some marathon guru to test if you really want to finish.


One last take about Boston; The crowds at Chicago cheer for its marathoners, but Boston is in fact cheering for itself at the marathon.  They don't just want you to hear, they want the hold world to hear that they are Boston, and hear them roar.

Email ThisBlogThis!Share to TwitterShare to FacebookShare to Pinterest
Labels: marathon, The Jade Rabbit

I heart hills. Most of the time.