Six Running Products I Would Pimp If Given The Chance

All around me I see bloggers getting rained on with products to review, yet I have a dark cloud over my head where no rain falls at all. Nothing.

Besides feeding my narcissism and being able to say "Hey, I have an Author Platform," I started this blog  for the sole purpose of procuring some running product freebies that would surely show up at my door, but so far there has not been a knock.

But here are the products, besides my ever-present promotion of my novels, that I would gladly pimp to my audience should they ever come knocking

1. Pro Compression Socks.
My little cankles (calf and ankles) are so tiny. Back when I was ten, my waist was too skinny to find any jeans. I couldn't wear Levis like the rest of the kids. It caused severe psychological trauma. The same has happened with compression socks. I usually have to wear a ladies small. But then I ordered a pair from Pro Compression, who had the best fitting socks, with high quality material, at a great price. I'm a believer. 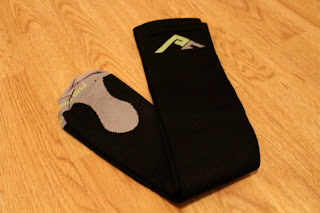 2. Shoes - Nike Pegasus
There are a dozen of shoes I have fallen in love with over the years, and I've loved them all for different reasons. We parted ways with wonderful memories. The reason these Nike Pegasus are special is they are the only shoe ever where I liked the update more than the original pair I tried on. Usually when I love a shoe I try to buy a few pairs and then sing me some Billy Joel: "Don't go changing, to try and please me, You never let me down before."  Then they go ahead and do an update to sell more shoes and mess everything up and wreck the relationship.  But I love the new Nike Pegasus, we have grown together. So if Nike ever asked real nice, I would let them sponsor me.

3. S-Caps.
I still remember the day someone told me about these electrolyte replacements. I had just finished a 23 mile training run, adding 3 miles to Running Fit's fall 20 miler, when a faster and wiser runner with tattoos all over his body started asking me all sorts of questions in the parking lot.  I  told him of my hopes for a BQ, and he subsequently condemned me for running 23 miles, but then noticed my face was streaked with white lines from salty sweat. "Try S-caps," he said, and explained about how Gatorade's electrolytes aren't soaked up by the stomach due to northern equator reverse osmosis, or some other science, and that I needed a different electrolyte replacement.  Before I left, he had given me 20 S-caps from his own supply, and I swear they make a difference.  Yes, I hit my BQ 3 weeks later, because of or despite the 23 miles in training, but certainly the S-caps will forever be the magic little pill. 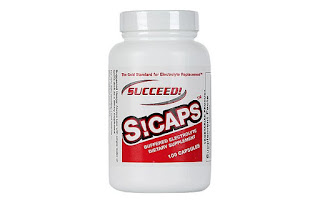 4. Hammer Recoverite.
Good stuff. Made a difference, costs a lot. Please, Recoverite folks, send me a line, give me your product. I will sell it in baggies to neighborhood kids until all of them get hooked and come begging for more. 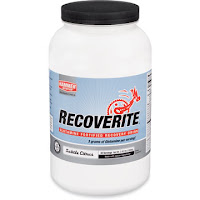 5. Kit-kats
I've already been pimping them in previous posts. (am I offending anybody by my use of the word pimp? if so, let me know, and I'll go back and edit this post). I first read about using Kit-kats to fuel up on long runs in an article about a bad-ass trail runner who said it was her favorite mid-run snack. Can't tell yet if it makes me a bad-ass, but it's great when you're tired of all the Gus and power bars in the world.  They are found in every gas station on every run, nice on the stomach, and tasty. Chocolate milk is sponsoring marathons, so maybe Kit-kats are next.

6. KT Tape (Kinesiology Tape)-
Does it work? Is there magic in that KT Tape? Who knows, but when you're injured and feeling powerless to do anything about it, nothing feels more empowering than taping, un-taping, and then taping your legs again and again, trying to find the elusive KT tape pattern that will magically heal your leg. Especially when you have hairy legs like mine. It's a free waxing.  I tried for days before the 2012 New York Marathon trying to find the right pattern. I do believe there's something to the power of KT tape, and I figure if they would let me peddle their product, they would also come straight to my door and have experts tape my leg.  Many expo's do have 'taping' experts who will tape your leg for you, and if you tweet them a picture they'll tell you how you did.  Get the pro version, by the way, it's much better.

1. Hammer Gels-
I know some folks love them because they are natural, reduce your carbon footprint, and you get a tax credit if you use them rather than regular Gu's, but I tried them once and had a bad experience. I literally puked in my mouth when I tried them, the eventual result being I swallowed two mouthfuls of slimy gu for the price of one. 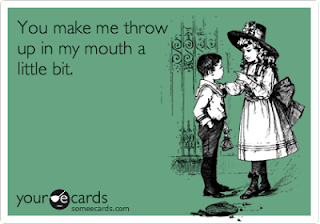 2. Water belts of any kind.
Or fuel belts. Or hydration belts. I hate them. I hate looking at them. I feel uncomfortable in their presence. It makes me metaphorically throw up in my mouth to write about them. Not entirely sure why. Maybe they remind me of those days stuffing airplane bottles of vodka in my pants.  (Full disclosure: I have never even tried a hydration belt, so they may be my Green Eggs and Ham)

3. IngDirect.
Why a bank? Well, Ing sponsor many races, including the Miami and New York City marathon and they have some cool "Ing Runner Nation" programs. For years they've given me great customer service with an independent cutting edge, and their mutual funds had done me well. So, what's the problem?

Well, IngDirect is gone. They have sold out to Capital One, and IngDirect is now Capital One 360.  Not sure what happens to all those marathons they sponsor, but I can't deal with that. Capital One reminds me of that first credit card I received with a 72% APR,  so I'm leaving IngDirect and transferring my 50 dollars to the cayman islands.

That's just a few, I could certainly add more to each list.

I'm in the same "heavy clouds but no rain" situation. In fact, it gets worse because I get emails all the time asking if I'll mention or promote a new product, but when I mention it might be helpful if they actually sent me a product to try, I don't get a response.
Though, maybe the worm is turning, as I got an email from Scott Douglas (name dropper alert) last weekend offering me a free copy of a new book for review - it should come today. Of course, that means I have to read said book, and you know how long it took me to finish your (likely more interesting) book.
Maybe you need to pick more obscure shoes looking to improve their name recognition, like Kahru, Skora, or Zithromax (wait, I'm not sure that last one's a shoe maker).

I love this post. I have become an "ambassador" for a couple products by waving my hand wildly in the air saying, "pick me!" However, the freebies have yet to rain down on me. I am with you on pimping ProCompression socks. LOVE them! And KT Tape (Pro, of course) has been a lifesaver. I am now taping up before every long run. Kit Kat? Really? I might have to try that. I get a little cotton mouth in the middle of a long run or race, so it seems a little dry. But on the trail it sounds pretty tasty.

I am with you on Hammer Gel. WAY too sweet.

S caps are indeed the magic little pill. There is no comparison to any other electrolyte pill out there.
And ditto on the ING selling out. I despise Capital One and I will be moving my 8.42 cents as soon as I can remember my password.....
Have you looked into PerkStreet?

haha nice giveaway! I hope I win! Love the excuse to eat more kitkats! Agree with your hammer gel thoughts, though you shouldn't be scared of hydration belts... I'm prone to heat exhaustion and they save me a lot of agony!

I'd really like to enter. I'm always saying that I never win anything so I figure I'm a shoe-in to win your giveaway.

I believe in compression and salt tabs. Both have worked well for me.

Yup, I'm super bummed about ING as well :( I had one of the debit cards, but probably going to cancel it soon.

I've received products to review, in the beginning it was mostly from me emailing them asking directly if I could review their product on my blog. After a time I started having people contact me, but as Greg mentioned, a lot of those people just want to link share, or guest post, or some crap and when I ask if I can use their actual product I get crickets in response. Now I don't review anything unless it's something I really, really, really love or want to try. No one ever comments on the product reviews unless they're giveaways anyway.

Now, as to the rest of your post, I too despise Hammer Gels. SO disgusting. Barf. I am also not a fan of the hydration belts, I can't even get a small spibelt to work on these hips so I for damn sure ain't letting a bunch of bottle knock about on them.

Hi! Do you know if they make any plugins to assist with
Search Engine Optimization? I'm trying to get my blog to rank for some targeted keywords but I'm not
seeing very good results. If you know of any please share.
Cheers!

I'm with you on the Nikes. And there's a bit of intregity that gets lost when you turn your blog into a quasi e-commerce site. I've turned down really cool (and expensive) stuff because of the conditions placed with the freebies and only review items I truly like or believe in. Also, a couple of times I've been told to return the product after I've tried it out. I am perfectly fine with that.

LOL, Great Post Mark! I remember when you won the Pro compression socks on a contest I did about this time last year. I am glad to see you now have a fundraising page, Very cool. I feel the way about ING! GRR.