Lullabies for Suffering is an anthology of dark fiction showcasing the insidious nature of addiction—damaged humans craving for highs and wholeness but finding something more tragic and horrific on the other side. The opioid epidemic has created vast devastation, and the only way to tell these dark truths is through a dark piece of fiction. A host of award-winning authors including Caroline Kepnes, Kealan Patrick Burke, and Gabino Iglesias shine a light on addiction in this poignant anthology.
Detroit, MI (PRUnderground) November 11th, 2019 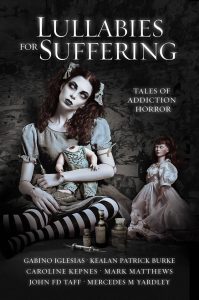 A host of award winning authors shine a light on addiction in this poignant anthology.

Wicked Run Press is proud to announce that Lullabies for Suffering: Tales of Addiction Horror is now available for preorder on Amazon, Barnes & Noble, and other major retail outlets. Publication date is January, 2020.

Lullabies for Suffering is an anthology of dark fiction showcasing the insidious nature of addiction—damaged humans craving for highs and wholeness but finding something more tragic and horrific on the other side. The opioid epidemic has created vast devastation, and the only way to tell these dark truths is through a dark piece of fiction.

An incredible list of talent is on display, including Caroline Kepnes, author of YOU, now a must-binge series on Netflix. Kealan Patrick Burke and Mercedes M Yardley, both Bram Stoker award winning authors, as well as two Bram Stoker finalists, John FD Taff and Gabino Iglesias, are also featured in the volume.

Lullabies for Suffering is the follow up to the highly praised, Garden of Fiends: Tales of Addiction Horror, which included one of the last stories published by the late Jack Ketchum.

Mark Matthews, the founder of Wicked Run Press, also has a story featured in the anthology. Matthews is a recovering addict with a series of ‘addiction horror’ novels, including Milk-Blood and All Smoke Rises.
Lullabies for Suffering has received fabulous initial praise and has recently been featured in outlets such as The Fix, the premier addiction and recovery magazine, and a limited edition hardcover is expected through Thunderstorm Press.

The paperback is available on January 7th, 2020, the digital version, January 14th, 2020. Both are available for preorder now. The audiobook is also expected for a January 2020 release, and is narrated by New York area actress Linda Jones

For more information, media contact, or advance review copies, contact WickedRunPress@gmail.com
About Wicked Run Press
Wicked Run Press
Because the wicked run when no one chases

Praise for Lullabies for Suffering
“My emotions are exposed and raw, my stomach tangled, my shoulders sagged. This open-veined collection tore me up. Each story was captivating and sucked me in and led me on a dark and twisted ride.” ~Nico Bell Fiction

Praise for the Writers in Lullabies for Suffering

Caroline Kepnes
“Hypnotic and Scary,” ~Stephen King, on YOU

Kealan Patrick Burke
“I am in awe of his Talent,” ~Bentley Little

Mark Matthews
“Matthews is a damn good writer, and make no mistake, he will hurt you.” ~Jack Ketchum

John FD Taff
“Has that rare literary talent and narrative skill to decide where you will feel what. It’s his choice along.” ~Erik Johnson


"Writes with such power, conviction, beauty, and sadness that as you read her work you will experience one of those rare occasions where the pillars of your soul begin to shake." ~Lee Thompson