"Met my old lover in a grocery store..." Some Backstory from "Same Auld Lang Syne"

I wrote the following short story/flash fiction for Pen and Muse's "12 Days of Christmas" project. It is based on the song "Same Auld Lang Syne" by Dan Fogelberg and gives some backstory of the song's narrator. It is a touch morose, but that's what happens when you put that song on repeat and listen to it 50 times in a row. Read and listen at the same time for the ultimate Christmas blog post experience.

“Met my old lover in the grocery store
The snow was falling Christmas Eve
I stole behind her in the frozen foods
And I touched her on the sleeve.” -Dan Fogelberg 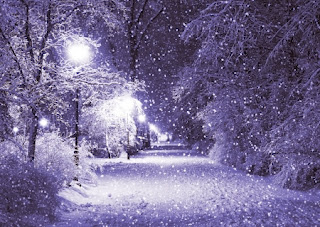 The pit of my gut boiled with acid. It was burning through the lining of my stomach, seeping out and spreading through my body.

This room would never be clean. Clothes and wet towels sprung from the ground like weeds. Dishes were always there. Memories dripped from the walls.  How often I used to be away from here traveling to a gig.

Now the walls are my prison and I’m stuck.

It started when I came home and the rooms were emptied. Divorce lawyer scrums followed.

My children used to smile at me. My wife used to smile. I had songs just for them. Now my voice is dry and lifeless.

Bile rose farther up my throat.  I needed a Rolaids before I burst like a volcano.

It was time to go out. Not just go out, but go out.  Big. This bile in my gut will be shared with the world. It will burn up more than just me.

I stepped outside to a gorgeous snowy Christmas Eve. Each white drop fell from a frozen, Godless sky.

Cold car seat leather made me shake.  My breath fogged from the cold. I would breathe fire and bullets soon.

Hiller’s grocery store was open and the parking lot was full. Last minute shoppers out for just one more thing to make the family meal look just right. Like in the commercials. The warm steam rising from Turkeys out of the oven. The smiling faces in the kitchen. They make that shit up in commercials. It never happens in real life.

The electric door swinging open was mysterious. The lights of the store made me squint. I was unsure what I looked like, but I knew I was ragged. I wondered if I looked like I had a pistol in my pocket.

I wandered through the produce section looking at fruit. Green bananas would brown and rot. Apples unpurchased would bruise and be tossed. Milk cartons were tagged with expiration dates I would never live to see.

A woman leaned into the frozen food section eyeing the packs of corn and broccoli, picking through as if any one was different from the other. As if the next choice she made would give her the love she wanted. Her hair flowed down her back. She wore no hat. It was cold. She looked busy. I imagined how she would fall after she was shot. I imagined the splotch of blood-red on her hair. I felt the power of the small pistol in my pocket. It was time to go out.

I wanted her to see me. One person, at least, should see the pain in my eyes.

With one hand reaching for the pistol, I touched her on the sleeve.

My memory.
Synapses shot. Memories exploded like gunfire into both of us. It was her. Oh my God, it was her.

My old lover in a grocery store.  My old friend.  I felt the bile inside me reside when she hugged me.  I embraced her back for a long while. Longer than formal and into intimate.  She was warm, safe.
I would have stayed there forever but the sound of clutter and something bouncing at our feet.  Her purse had spilled. I tucked the pistol deep into my pocket and bent to help her.  A blue leather wallet, a packaged of bandaids, a small bottle of ibuprofen, all of it was back in her purse, and then I looked back to her eyes. They were laughing eyes. This mini-catastrophe had made her laugh, and that was her.  Her glow of joy hadn’t changed. I wanted the air she exhaled from her lungs to go directly into mine.
God I could never harm her. Never.  In my self-indulgent, self-pity bullshit I almost ended her life. We were both in tears, mine sad and tragic, hers happy. It was a mess.

She was the part of me chiseled out and made into something more perfect, more divine.  We met at 16 years old. We had a nervous first kiss and terrifying backseat sex. We took adventures; a long drive to Cedar Point to ride roller coasters and get caricature paintings. We backpacked the Appalachian trail the year before college because we thought we were going to different schools, but changed our plans around campfires where our deepest parts were smoked out of us. We decided not to separate and went to college together. We cheated on tests and plagiarized papers.  We traveled to Chicago to see the Indigo Girls and drove back the same night. We spent days tangled up in bedsheets eating ice cream and watching movies.  I was there after her procedure. When she was hurt.   And she was there in the front row, gig after gig, in the Ann Arbor coffee shops.

School made her grow practical and strong, music made me flighty and erratic. When she finally left me, I failed out of school, and worse, would never learn.  How do you survive breaking apart from the best part of you?

Losing her was just the first break. Others would come.

I thought of what  I looked like to her. My aged skin, my tired eyes, the hope gone from my soul.
“The years have been a friend to you,” I told her. “Your eyes are still as blue.”

What the fuck was that? I wanted to snatch it back after I said it, but then she looked away and I saw something.  A glimpse of disappointment, discontent. Maybe she longed for the life we had dreamed about together but never lived.

My pistol. It was there. Safety was on. I pulled my jacket down to cover the bulge. I walked with her to the checkout, me with nothing to buy, and her maybe suspicious.

The first bar we tried had an open neon flashing sign on, but the parking lot was empty and the damn thing was closed. I knew the place. Always a false open sign. Owner serves the morning auto workers drinking vodka for breakfast to stop the shakes.

“Bars are closed Christmas eve I guess,” she said.
But she was wrong. There were other bars open. I knew them all around here. Lonely saps like myself, drinking slowly and trying to pretend they were with family. If we went there now, unshaven men would get off their barstools and  come to ask me who she was. They would laugh and talk too loudly with whiskey spitting from their lips, and she would curtly end the evening.

“Liquor store. See if they have Pabst Blue Ribbon. In a can. You got a radio, half a tank of gas. We can drink it in the car. We’re good.”

She always loved his spontaneity.  Did she realize that she was the flame that fueled it?

Cold beer from even colder metal on our lips.  With each sip a little less to talk about, bigger sips to cover the emptiness. Underneath the dashboard, heat blew at our feet. The radio was tuned to Christmas songs.

We talked a bit of old friends. We held back questions we didn’t want answers to. The diamond rock on her finger but no ring on mine was obvious.

“I married an architect,” she said.

Someone who built things and didn’t tear them down is all I could think.  I didn’t ask any more questions but looked into her blue eyes which told truths.

She could have tried to lie, but I would have known. She did love him once, but it faded and emptied. Like our beers. Like my life.

Was she asking me to tell her that I always loved her? That I felt love for her right here, sitting in a cold car with snowflakes covering us, burying us alive together.

On the radio, Winter Wonderland played. Unmarried lovers wanted Pastor Brown to marry them in town. The vows would be broken, but the memories of building snowmen in the meadow would not.

“You still buy records don’t you?” she both asked and accused.  “Because  I saw you in the record store. Flipping through vinyls of The Velvet Underground. I almost said Hi. I heard you were traveling. You were getting gigs everywhere. I thought you must be doing well.”

“The audience was hell on me” I said.

The audience was my family, my wife and my child who I will never, ever tell her about. She will never know about the ones who left me.

I tried to speak but could not.

“They love you, the Audiences I mean.. I’ve seen how they do.”

“Yes, at times.” I said. “The audience was heavenly, but the traveling was hell.”

I needed to go. Needed to get out of this commercial before I blew apart. Not in anger but in tears. She knew I had enough. That I couldn’t take it, so she leaned forward to kiss me. Not on the cheek, but the lips. The sound of the soft smack was frozen in the car.

“I’m on facebook. Connect with me. Write me. Call me. We can talk.”

Acid filled my gut. I felt that old familiar pain. Now I had nothing. Just the sight of her red brake lights as she drove away. The taste of her lips on mine would soon fade.

Snowflakes dropped from the cold God in the sky.  Inside of me, bile sizzled like a steak on the grill. I reached for the safety of the gun in my pocket. Something would have to give. I can’t handle life anymore, but I will certainly not harm another. She saved me from that.

My chest heaved with anticipation. I started to pant like a dog.   Lights all around me from strip malls full of people who would never know my pain. I can’t take it. Can’t take the coldness of life falling on me tonight. I will die if this snow keeps falling.  Each flake of snow that froze my skin was proof that the assault on my soul would never end.

I had fully planned to kill myself that night, at home with as little mess as possible, but I changed my mind and spent Christmas morning alive and breathing instead. I even made it to New Year’s day.

For as I turned to make my way back home, the snow had turned into rain.

Love it Mark! Thank you so much for sharing!